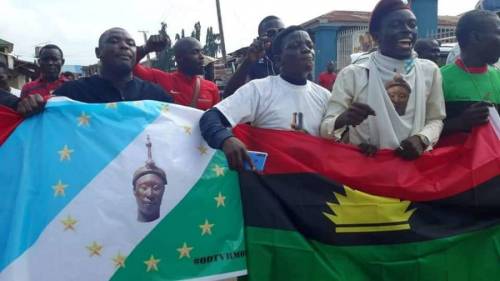 The agitators of Biafra and Oduduwa republics have joined forces to train their operatives in a joint session in a bid to protest the southern part of Nigeria against suspected Fulani herders and other criminals.

The agitators titled the statement, ‘Press Release from the Joint Training of Biafra and Oduduwa Volunteer Force.’

The spokesman of IPOB, Emma Powerful revealed the content of the statement that was released on Monday.

The statement reads, “This is to put the Nigerian Government and her security agencies in Nigeria on notice that Biafra and Oduduwa have further strengthened their bond as one people, following the joint training of personnel from both sides.”

“These joint volunteer force will secure the territories of Southern Nigeria against ‘foreign Fulani terrorists and any unwarranted aggression from any external force’.”

“Oduduwa and Biafra Volunteer Force demand an immediate end to the ongoing genocide against the people of Biafra and immediate demilitarisation of Biafraland as we are now ready to defend our territories against aggression. The killing and abduction in Biafra and Oduduwa land must stop immediately.”

“Today we have trained together, dined together, and drunk together. Should duty call for it, we shall die together in defence of the entire South. We shall defend our land together, this is a historic day for both nations.”