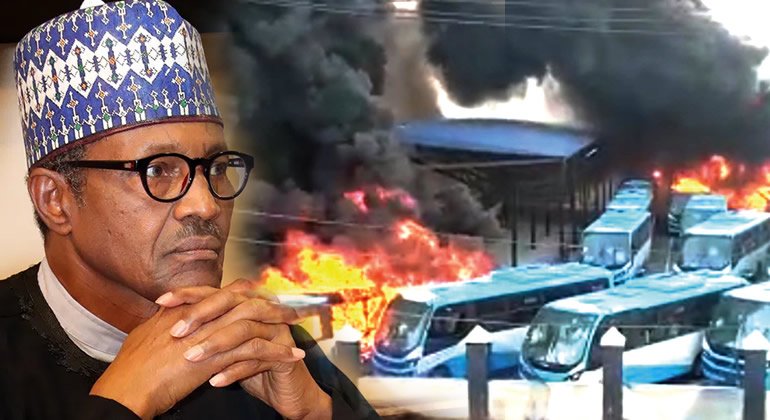 President Muhammadu Buhari has revealed that he told Governor Babajide Sanwo-Olu to tell Lagos residents to walk after buses were burnt during the #EndSARS protest.

Naija News recalls that during the October 2020 #EndSARS protest hoodlums took advantage of the demonstrations to burn down vehicles and buildings across the country, including several vehicles under the Bus Rapid Transport (BRT) scheme.

Following the incident, Sanwo-Olu had visited Buhari at the presidential villa, carrying alongside with him photos of the destruction recorded during the protests.

But speaking in an interview on NTA on Friday, Buhari said he told the governor to tell Lagosians to walk because the federal government didn’t have the funds to replace the burnt buses.

He said: “Look at the #EndSARS incident in Lagos. The previous governor of Lagos state bought 200 buses to complement the transportation in Lagos. And he built a complex. But they went and burnt them.”

“The present governor made an album and came to see me. I said ‘Thank you very much’. I took the album, put it in my archives and I told him to tell the Lagosians to walk, because we don’t have the money.

“After an administration bought over 200 buses, for some people to come and burn it? So, let them walk.”