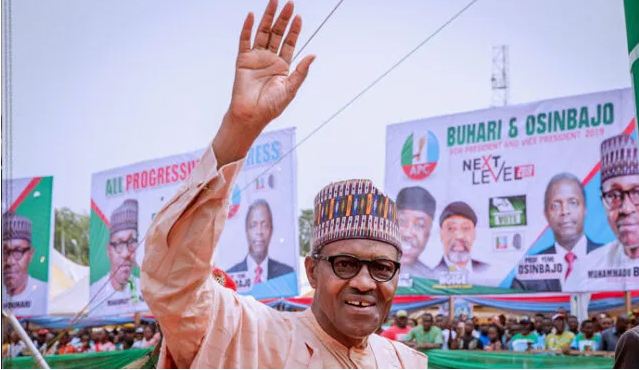 President Muhammadu Buhari on Thursday visited the Police College in Ikeja where he launched newly procured security equipment for security agencies in the state.

Naija News reports that the security equipment, donated by the State Government, include Armoured Personnel Carriers (APC), operational buses and vans, bulletproof vests, ballistic helmets, arms and ammunition, among others.

Those at the launch include: Governor Babajide Sanwo-Olu of Lagos, Governor Dapo Abiodun of Ogun, Speaker of the House of Representatives Femi Gbajabiamila.

Others are The Inspector General of Police (IGP) Usman Baba Alkali, Oba of Lagos Rilwanu Akiolu I and the Iyaloja-General, Mrs. Folashade Tinubu-Ojo.

Meanwhile, Buhari has revealed that youth unemployment and poverty triggered the Boko Haram insurgency in the North.

In an interview with Arise TV on Thursday, the Nigerian leader believed that if the issues of unemployment and poverty are solved, the Boko Haram insurgency will be defeated.

He noted the majority of the Boko Haram members are Nigerians after being told so by the Borno State Governor, Babagana Zulum.

Buhari stated that his government has done a lot to fight the terrorists but the problem in the “North-East is very difficulty.”

The President also directed the military and the police to deal with bandits terrorizing the northwest region of the country.

According to Buhari, he would treat bandits in the language they understand and there will be a difference in few weeks.