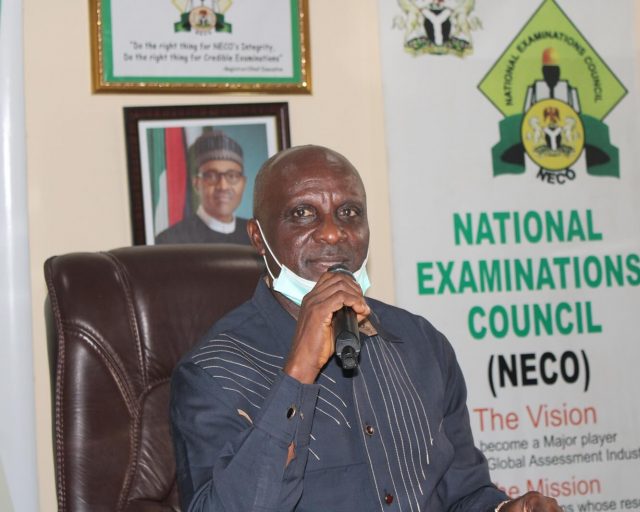 The Registrar of the National Examination Council (NECO), Professor Godswill Obioma has been confirmed dead.

Some early reports about the NECO Registrar’s death have it that gunmen stormed his residence in Minna, Niger State on Monday night, killed him, and left without taking any item.

“The assassins came in and killed him and left without taking anything,” Elizabeth Obioma, wife of the victim told Peoples Gazette by telephone on Tuesday morning.

She narrated that her husband had just returned to Minna from a trip to Abuja when the armed men, lurking in his compound, descended on him and strangled him.

However, the National Examinations Council (NECO) has denied media reports that its Registrar, Prof. Godswill Obioma, was killed by unknown gunmen in Minna, Niger State.

In a statement on Tuesday, Director, Human resources of NECO, Abdul Mustapha, denied reports that Obioma was assassinated.

Mustapha added that Obioma died in his sleep as a result of heart failure and not killed by unknown gunmen,

The NECO official noted that Obioma’s second son, Prince Godswill Obioma, informed him of the death of his father in a letter.

Also, the Niger State Police Command, on Monday noted that the report that the Registrar of the National Examination Council, Prof. Godswill Obioma was assassinated by unknown gunmen in Minna is untrue.

The command disclosed that his family had formally announced that he passed on after a brief illness at the National Hospital in Abuja.

The spokesman of the command, Wasiu Abiodun, revealed this in a statement with Ref. No: AZ:5250/NGS/PPRO/VOL.20/117 on Tuesday.

He said, “The attention of Niger State Police Command has been drawn to a publication circulating in some section of social media and national dailies that NECO Registrar, Prof. Godswill Obioma was murdered by unknown gunmen in Minna. This story is totally false, untrue and a pure piece of fake news.

“It is important to state categorically that on 31st May 2021 the family of the Registrar/CEO National Examinations Council (NECO), Prof Godswill Obioma formally announced that he passed to eternal glory after a brief illness at National Hospital Abuja.

Naija News reports that the 67-year-old Obioma was appointed as NECO Registrar about a year ago in May 2020 by President Muhammadu Buhari.

He was from the Southeastern state of Abia.

The incident comes just a few hours after Ahmed Gulak, a top politician was murdered in cold blood by gunmen in Owerri, Imo State.