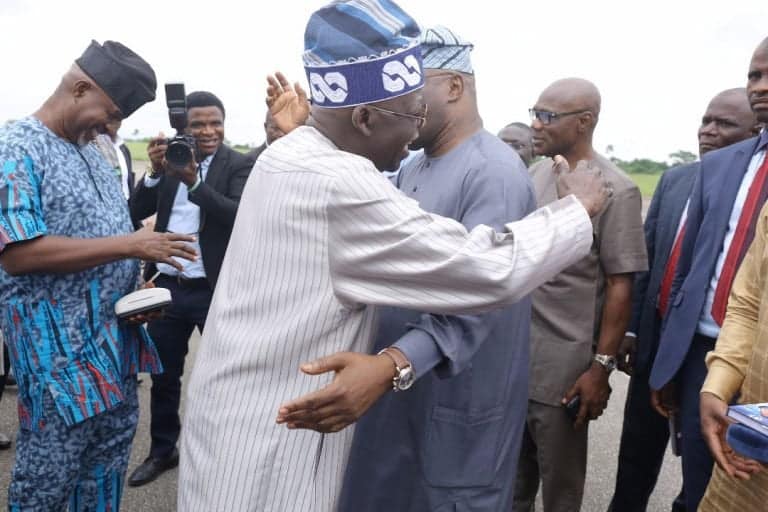 The All Progressives Congress (APC) has reacted to the meeting between its National Leader, Asiwaju Bola Tinubu, and former Vice President of Nigeria, Alhaji Atiku Abubakar.

This follows the mixed reaction from Nigerians after the two statesmen met at the Nnamdi Azikwe International Airport, Abuja on Friday, May 28 as Atiku, a chieftain of the Peoples Democratic Party (PDP) returned to Nigeria after a long vacation abroad.

However, the APC UK has said the meeting between the two statemen was just a chance meeting and Tinubu was not at the Airport to welcome Atiku back into the country.

The statement added that both leaders later continued their journeys separately after the chance meeting at the airport.

It will be recalled as earlier reported by Naija News that in a viral video on Twitter on Friday, the former Lagos governor was seen welcoming the chieftain of the Peoples Democratic Party (PDP) back to the country.

Tinubu welcomed Atiku back to Nigeria after spending almost a year in Dubai, the United Arab Emirates (UAE), following his defeat to President Muhammadu Buhari at the 2019 Presidential election in Nigeria.

The meeting between Tinubu and Atiku is coming at a time some Nigerian politicians have started making moves ahead of the 2023 Presidential election by defecting.

The APC statement reads: “A tweet by one Reno Omokri [@renoomokri], posted on Twitter at 6:24am on May 29th, 2021, with a video captioned: “Tinubu Receives @Atiku At Airport As Former VP Returns to Nigeria” has been brought to our attention.

This is to inform the general public that the information contained in the above-referenced tweet is fake, erroneous, and mischievously contrived by the fake news advocate to mislead Nigerians, chase clout and gain undeserved recognition.

His Excellency, former Governor of Lagos State and the National Leader of the All Progressives Congress (APC), Asiwaju Bola Ahmed Tinubu [@AsiwajuTinubu], and former Vice President of Nigeria, Atiku Abubakar [@atiku] met last night, May 28th, 2021 at the airport by chance!

Both statesmen arrived at the airport at about the same time and exchanged courtesies before continuing on their separate journeys. The brief ‘meeting’ was not pre-planned neither was Asiwaju Tinubu part of any entourage to welcome the former Vice President back to Nigeria.

We appeal to Nigerians to disregard and discountenance the petty, baloney, and clout-chasing tweet manufactured by the dubious character named Reno Omokri a.k.a Wendell Smith.”

A tweet by one Reno Omokri [@renoomokri], posted on Twitter at 6:24am on May 29th, 2021, with a video captioned: "Tinubu Receives @Atiku At Airport As Former VP Returns to Nigeria" has been brought to our attention. pic.twitter.com/929b3dR1TY

Meanwhile, Governor David Umahi of Ebonyi State has announced the sacking of all board members and the dissolution of all commissions in the state with immediate effect.

Naija News reports that he announced this during his 2021 anniversary day address to the people of the state.

Giving reasons, Umahi said the sack became necessary because some of the appointees have sympathy for the opposition Peoples Democratic Party (PDP).