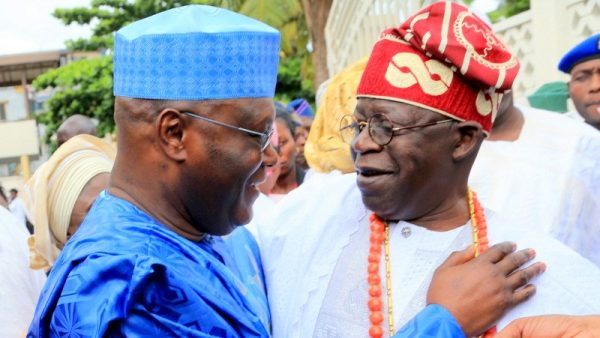 The media aide to the National Leader of the All Progressives Congress (APC), Asiwaju Bola Tinubu, Tunde Rahman has explained details of the meeting between his principal and former Vice President Atiku Abubakar.

The media aide in a statement on Twitter noted that both leaders are friends and only met at the Airport where they exchanged pleasantries.

He added that the meeting between the two of them was not pre-planned and both of them continued their separate ways after the chance meeting at the airport on Friday.

Naija News reports that the viral video of the meeting between Atiku and Tinubu has been generating lots of reactions from Nigerians on social media.

Rahman explained that Atiku arrived first at the airport and when Tinubu also arrived, his boss walked up to the PDP chieftain and former Vice President to exchange greetings.

He warned those trying to create issues out of the chance meeting between the two leaders to have a rethink.

He wrote: “On the Asiwaju Bola Tinubu – Alhaji Atiku Abubakar video at Abuja Airport. It was a chance meeting at the airport in Abuja. Former Vice-President Atiku Abubakar had arrived first and was in his car about to leave when Asiwaju arrived.

“As he was informed about him, Asiwaju walked up to Atiku vehicle to exchange pleasantries with him.

“Those making an issue out of this noble gesture should have a rethink. For the life of me, are they saying if two persons know each other and are friends, they must not greet each other as mature persons again because they find themselves in opposing political parties? If that’s their thinking, this is a warped idea!”

On the @AsiwajuTinubu –@atiku Video at Abuja Airport-
It was a chanced meeting at the airport in Abuja. Former Vice President @atiku had arrived first and was in his car about to leave when @AsiwajuTinubu arrived. As he was informed about him, @AsiwajuTinubu walked up to @atiku

Meanwhile, Pastor Osagie Ize-Iyamu has reacted to the Supreme Court judgment that affirmed the victory of the winner of the election, Governor Godwin Obaseki.

Reacting in a statement on Saturday titled: “Because we were gallant, our hope is alive”, Ize-Iyamu asked his supporters and APC members to remain peaceful.

“Yesterday, the Supreme Court by its judgment brought to an end our struggle for the office of the governor of Edo State that commenced in September, 2020.”

“I thank all our supporters as well as our loyal party men and women for your unwavering commitment and sacrifice to the advancement of Edo state and urge you to be law-abiding and to be of good cheer,” he said in part.