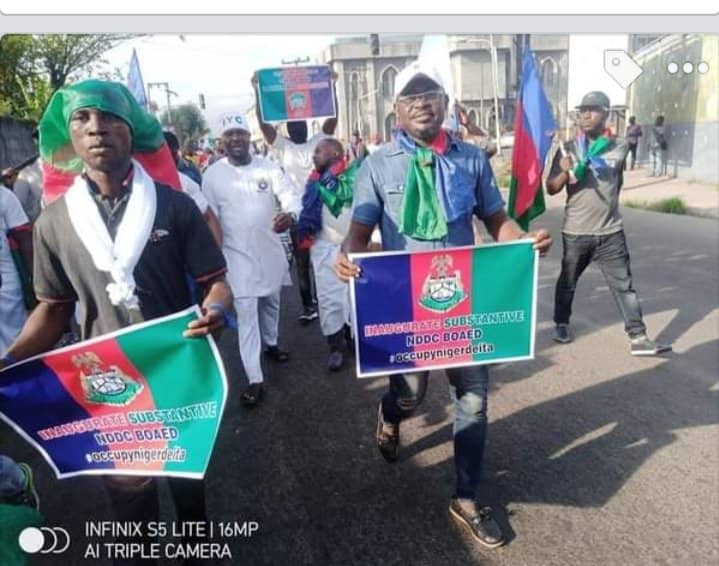 The headquarters of the Niger Delta Development Commission (NDDC) locate in Port Harcourt, Rivers State has been shut down by protesting youths.

The youths in their hundreds under the aegis of the Ijaw Youths Council (IYC) stormed the NDDC office on Thursday and shut down the building.

They also hoisted the IYC flag and stopped all human and vehicular entry into the building.

The youths also set up two tents in front of the main entrance of the newly-commissioned complex, singing and dancing to solidarity songs.

The youths have vowed to remain there until the federal government inaugurates the NDDC board.

According to the Assistant Secretary of IYC, Eastern Zone, Ibiso Harry, the action was directed by the IYC President, Peter Igbifa.

Naija News recalls the youths on Wednesday shut down the Bayelsa office of the Niger Delta Development Commission (NDDC).

Meanwhile, the president of the Ijaw Youths Council (IYC) Worldwide, Peter Igbifa has narrated his experience while he was in the custody of his kidnappers.

Igbifa who narrated that he was picked up by some unknown persons on Tuesday morning, narrated that they wanted him to stop the ongoing protest against the federal government as regards the non-inauguration of a substantive board of the Niger Delta Development Commission (NDDC).

Naija News previously reported that unknown persons picked up Igbifa around 8.45am on Tuesday along the Port-Harcourt international airport route.

Narrating his ordeal on Wednesday night, Igbifa said he was abducted by assailants who blindfolded him, drove him around different places, and wanted him to make a video telling protesting youths to call off their protests in the region.

However, when he told them he couldn’t reverse the order or protest, they got frustrated and dropped him off on Wednesday night in Opokuma, Bayelsa State.

The IYC president noted that some locals in the area were the ones who helped him get to the Bayelsa State Police Command where he was debriefed by the state commissioner of police before he also met with the sate governor, Duoye Diri.