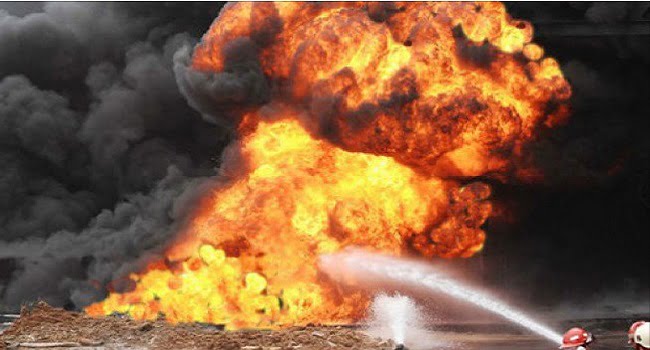 A gas explosion in Bauchi State on Monday has reportedly resulted in the death of at least two persons while several others have been seriously wounded.

The gas explosion was said to have happened inside a garage in Azare town, Katagum Local Government headquarters of Bauchi State.

Naija News gathered that the explosion happened when the driver of a trailer drove into the garage located along Jama’are with the intention of carrying out some repairs in the workshop of a welder.

It was in the course of carrying out the repair that a gas cylinder in use exploded suddenly.

“It was in the process that a gas cylinder used by another welder on a vehicle exploded suddenly.

“The fire from the explosion then spread to where the trailer was parked and it immediately caught fire and affected people around the garage.

“This caused pandemonium as people scampered for safety from the raging flame, burning many in the process,” a source told The Punch on the phone.

Those injured in the explosion are said to be receiving treatment at the Federal Medical Center and the General Hospital in Azare town.

In other news, the Police on Monday confirmed the arrest of a suspected kidnap kingpin Paul Terwase Agbem in Kwande Local Government Area of Benue State.

The suspect was arrested along with his accomplice, Mson Yaasa of Adikpo.

A statement by the Benue Police spokesperson, Anene Sewuese Catherine said the suspected kidnappers were arrested from their hideout on Saturday where they had perfected plans to abduct another victim.

According to her, the suspected kidnappers were nabbed at Ankpa Quarters in Makurdi the state capital while the Police is on the trail of other members of the group.