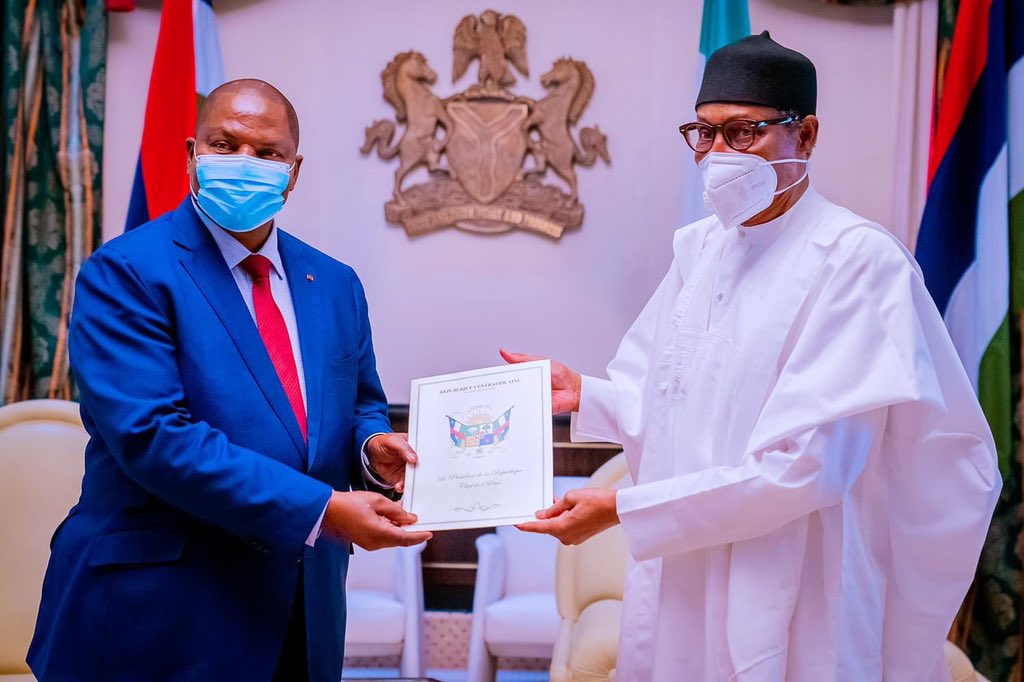 Naija News understands Touadéra was in Abuja on the invitation of President Buhari.

The two leaders discussed issues concerning Lake Chad and the wider subregion, and also relations between the two countries.

The Special Assistant to President Buhari on Digital and New Media, Tolu Ogunlesi confirmed the meeting between the two leaders in a Twitter statement.

He quoted the CAR President as noting that his country needs the experience of Nigeria in building and rebuilding its Army.

He also called on Nigerian investors and businessmen to come and invest in his country.

The full statement reads: “President Faustin-Archange Touadéra of the Central African Republic (CAR) is visiting President @MBuhari at the State House, this afternoon.”

President Touadera was quoted as saying: “I’m here at the invitation of Pres. Buhari for the Lake Chad Basin Summit & to discuss issue concerning Lake Chad and wider subregion, and also relations between our two countries. Thank you for the warm hospitality from the government and people of Nigeria.”

“We discussed that in CAR there’s a need to rebuild the army, Nigeria has a big army and a lot of experience, & there’s a possibility of cooperation in that regards. We are hoping the Nigerian Min of Defence will facilitate that co-op, with training & equipment.”

He added that “Nigeria has very dynamic businesspeople, and I would like to encourage Nigerian businesspersons and industrialists to come to the Central African Republic (CAR) and invest there and create opportunities for employment and mutual benefit.”

Meanwhile, it will be recalled as earlier reported by this online medium that President Muhammadu Buhari also on Monday hosted a delegation of Nigerian governors who were in the Aso Rock Presidential Villa on a condolence visit to the President.

The Governors were at the Villa to condole with Buhari following the death of the Chief Of Army Staff, Lt-Gen Ibrahim Attahiru, and some other military chiefs in an ill-fated plane crash on Friday.

Those who visited the President on Monday were the Chairman of the Nigerian Governors’ Forum (NGF), Dr Kayode Fayemi, the Chairman of the All Progressive Congress (APC) National Caretaker Committee and Yobe State governor, Mai Mala Buni, and the governor of Niger State, Sani Bello.