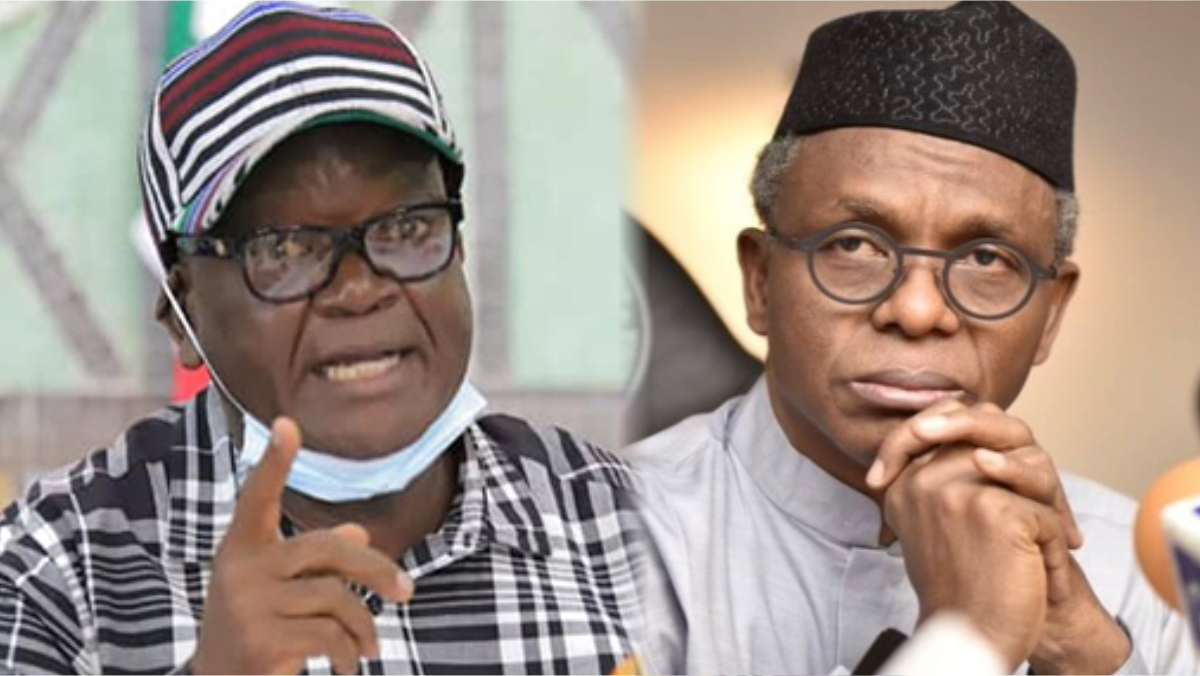 The Benue State government led by Governor Samuel Ortom has warned Kaduna State Governor Nasir El-Rufai to deal with the insecurity ravaging his state before talking about that of other locations in the country.

The Benue State government in a statement on Saturday issued by the Chief Press Secretary to the state governor, Terver Akase also accused El-Rufai of misleading President Muhammadu Buhari on issues of insecurity ravaging Nigeria.

The position of the Benue State government comes as a response to an earlier position by El-Rufai who accused Ortom of blaming the federal government for insecurity in Benue as a way to cover up his own leadership failures.

However, Ortom in his reply said El-Rufai has no moral justification to talk about how to curb insecurity, accusing him of causing problems for his own people in Kaduna State.

Ortom added that the Kaduna State Governor is only painting him in a bad light to score cheap political points with the Aso Rock Villa.

He further accused El-Rufai of being a religious bigot and sycophant.

The statement reads: “We want to believe that El-Rufai was wrongly quoted. A man who has failed in several aspects as Governor of Kaduna has no moral justification to accuse another Governor.

“A Governor who has divided the good people of Kaduna against one another by not hiding his hatred of indigenes of the state on account of religion and ethnicity is not qualified to judge another Governor on any issue whatsoever. A Governor who chose a Muslim deputy in a state where Christians have a huge population is certainly not one to preach unity and peaceful co-existence.

“El-Rufai’s attack on Governor Ortom is merely to make him look good before the Presidency. He has apparently fallen out of favour at the Villa and wants to use Governor Ortom as a launch pad back to reckoning. How has he handled his own problems in Kaduna? This is a man who has insulted almost every prominent Nigerian including the late President Umaru Musa Yar’Adua and former President Olusegun Obasanjo; a man who is his former boss and one who brought him to limelight.

“Nigerians have not forgotten the unprintable things El-Rufai said during Goodluck Jonathan’s time as President. He insulted the then President and publicly supported terrorists attacking parts of the country. His statements on the abduction of Chibok girls and several other acts of terrorism are still fresh in our minds. El-Rufai is on record to have said repeatedly that Fulani people must retaliate any wrong done to them no matter how long it takes.

“Is Governor Ortom responsible for El-Rufai’s inability to ensure peace in Kaduna State where bandits have taken over some communities while kidnappings and killings occur on a daily basis?

‘El-Rufai admitted to paying Fulani herdsmen whom he invited from other West African countries in the name of stopping attacks in Southern Kaduna. Since he made the confessional statement, attacks on the people of Southern Kaduna have escalated. This is why he wants men of good conscience like Governor Ortom to be silent to pave the way for the conquest and expansion agenda to succeed.

“Kidnapping has become a common crime in Kaduna State under Nasir el-Rufai.

Aside from the much celebrated cases, it has been estimated that at every given time, not less than 300 persons are abducted in Kaduna by kidnappers who are always identified as El-Rufai’s kinsmen. He pays them billions to embolden them. He has turned the state into one of the most unsafe places to live in Nigeria today.

“Talking about taking someone seriously, if other Nigerians take El-Rufai seriously, we in Benue do not do the same. A man who has no regard for humanity does not deserve our attention.

“Nasir el-Rufai is a sycophant, ethnic champion and religious bigot who hates anyone who does not share the same faith with him. He is among the very few persons who have misled President Muhammadu Buhari. El-Rufai is one of the real enemies of this country who do not hide their divisive tendencies by elevating nepotism and ethnicity above the good values that have held Nigeria together over the decades.

“Nasir el-Rufai doesn’t possess the credentials to counsel anyone on payment of salaries and the welfare of workers. This is a Governor who recently sacked 4,000 workers for no just cause. He ought to be ashamed of himself. What happened to the lofty promises he made to the Kaduna people in 2015?

“The Kaduna Governor should know that only two days ago, the people of Benue State met at a stakeholders meeting in Makurdi and unanimously passed a vote of confidence on Governor Ortom in recognition of his performance. That meeting was attended across party lines with leaders of All Progressives Congress, APC also present.

“El-Rufai and his conspirators must note that Benue State will not repeal the Open Grazing Prohibition and Ranches Establishment Law, no matter the amount of blackmail, hatred and threats they wage against Governor Ortom.

“We advise the Kaduna State Governor to focus on addressing the numerous problems he has created in his state and leave Governor Ortom to lead Benue in peace”.