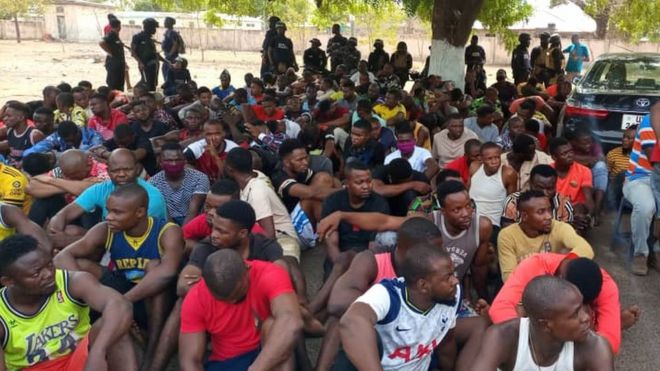 Ghana government has frowned at the influx of foreign nationals into their communities.

Reports reaching Naija News at this time had it that no fewer than 494 Nigerians have been handed over to the Ghana Immigration Service for deportation after findings revealed they entered into the country illegally.

Assistant Superintendent of Police (ASP), David Fianko-Okyere, spokesperson for the Regional Police Command, while speaking on the development in an interview with the Ghana News Agency in Bolgatanga today, revealed that the drastic decision was taken following intelligence of the police service.

Naija News understands that thirteen citizens of Burkina Faso who were part of foreign nationals arrested by the Upper East Regional Police Command in Ghana have also been deported home. The police spokesperson said the region had implemented a new strategy which included a 24- hour robust patrol on highways and swoops, especially in the Bolgatanga Township.

Fianko-Okyere revealed further that the operation led to the arrest of 507 foreigners including Burkina Faso and Nigerians in the Bolgatanga Municipality and its environs. According to him, apart from the intelligence of the police service, they also had information from the public about the influx of foreign nationals into their communities.

According to him, residents had lamented and claimed rising crimes in the region on foreign nationals. He said preliminary investigations by the Ghana Police Service indicated that those arrested stayed in the country without proper documents but said the Ghana Immigration Service was in the process of processing all the foreigners before deporting them.

Fianko-Okyere noted that due to the geographical location, the “13 people from Burkina had already been handed over to the appropriate authorities in that country, while the rest who are believed to be Nigerians have been transported to the Immigration headquarters in Accra to be deported.”

Naija News learnt that apart from those arrested by the Ghana immigration officers, some Nigerians voluntarily presented themselves over to the police service to be deported home.

Meanwhile, Nigeria Government on Monday expressed worries over the increase in COVID-19 cases in India, Brazil and Turkey.
Naija News reports that the Federal Government noted that it might consider issuing a travel advisory on international flights coming from these countries in the next 48 to 72 hours.