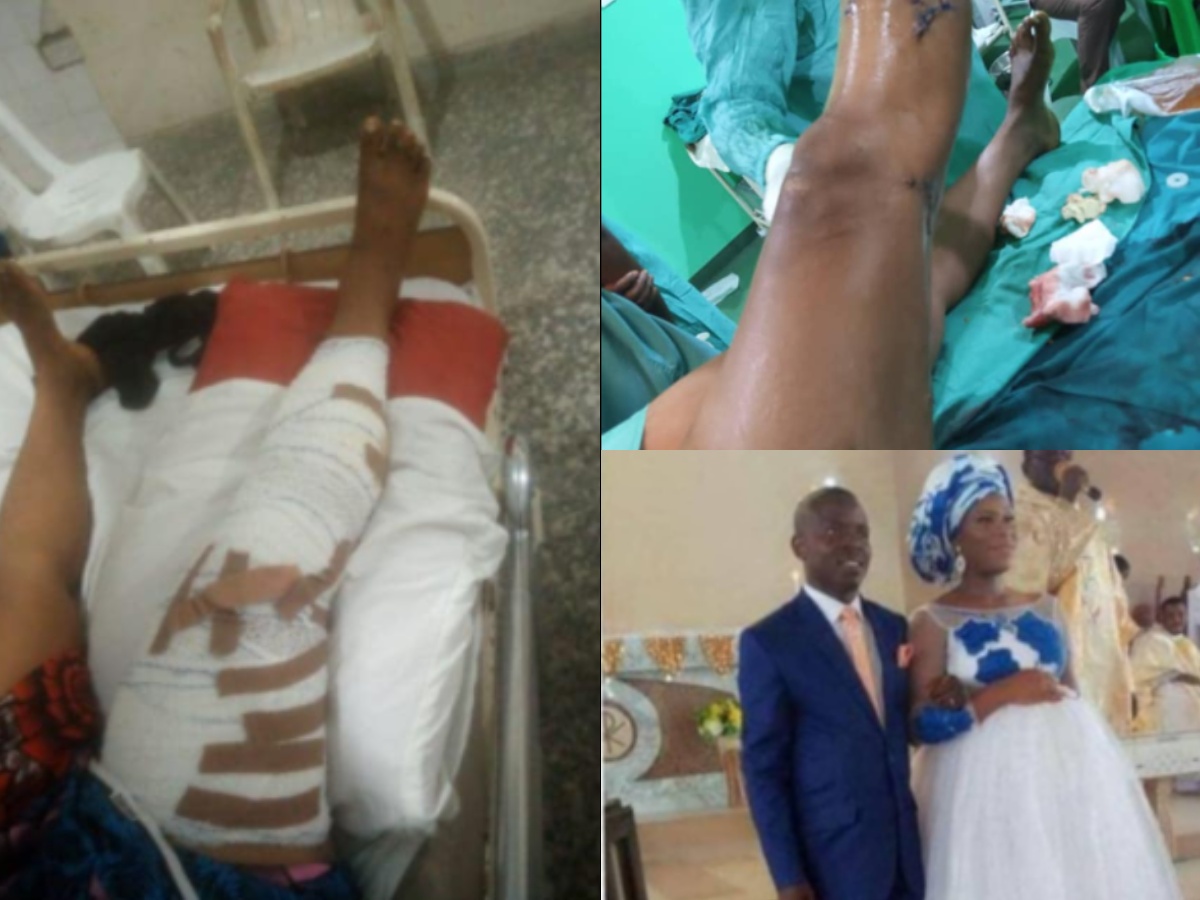 Three years after their marriage, a woman has taken to social media to share a horrible experience she had with her alleged cheating husband.

Sharing her story on Facebook, Roselyne Victory O’Neill explained how she went from having no scar to someone who now has no arm and after her husband butchered her because he suspected her of cheating.

According to O’Neill, she had caught her husband cheating many times during their courtship and even after their wedding on their matrimonial bed, but she did not take any cruel action as she forgave him. O’Neill who now has one arm after her left arm was amputated following attempts by her husband to stab her on her chest, said they married on November 24, 2018, after both checking their HIV status and submitting negative reports.

In her narration, O’Neill alleged that after their marriage, she discovered her husband had tested HIV positive since 2017 but concealed the information from her. She said she confronted him about it and he told her he owes her no explanation.

Subsequently, she took herself and their baby boy for HIV test, forgave her husband, and remained in the marriage. Roselyne, who has a food stand in Cultural Centre Field, Calabar, said her life changed on Dec 27, 2020. She woke early that Sunday and went about her business to fend for herself, as she claims her husband spends his money on women and she’s left to cater for her needs on her own.

Narrating further O’Neill said since it was the festive season and most of her workers travelled for the Christmas break, she had a lot of work on her hands.

While selling food to people who returned for the Christmas holiday, she said a customer came in and she recognized him as an old friend from school. They hugged, chatted briefly, then she went about serving her other customers. Because it was a busy day for business, she sold food till 11pm. She explained that she was too tired and sleepy by the time she was done so she called the driver who usually takes her back home but he wasn’t picking.

Her old classmate, who was still on the field with other revellers, tried to help her order a cab online but she said the cost was too expensive, so she just arranged chairs and decided to sleep at her stand that night.

She explained that this is not unusual during festive seasons and there were others also staying over at the field. She slept off immediately and woke the next morning to shouts from her husband calling her a “prostitute” and other names. She said that before she could defend herself, he brought out something she thought was a belt and aimed it at her chest. She blocked with her arm and that’s when she discovered it was not a belt but a knife.

He reportedly struck her arm three times before people in the field attempted to stop him. Angered that he could not succeed in stab her in the chest, he allegedly started stabbing her leg and she lost consciousness.

She was rushed to the hospital where she underwent 3 surgeries and subsequently her arm became infected due to the knife used to inflict the injury and had to be amputated.

She revealed that even while she was in the hospital, she discovered her husband was busy seeing other women and wouldn’t provide the full money needed for her treatment.

She says she’s done with the marriage and now calls him her “ex-husband”.

The operatives from the Ibadan Zonal of the EFCC arrested the suspects at Adigbe, Oloke, Ibara Housing Estate Extension and Idi Ori areas of Abeokuta.