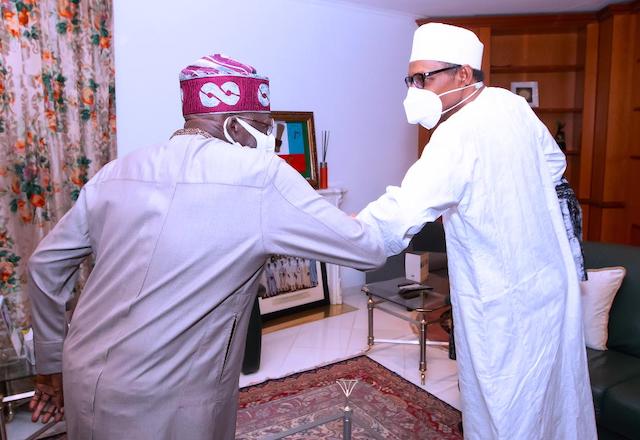 National Leader of the All Progressives Congress (APC), Asiwaju Bola Tinubu has ruled out the possibility of President Muhammadu Buhari staying in office beyond 2023.

Tinubu who defended Buhari as a man of integrity who only operates by the rule of law noted that the President would hand over as soon as his tenure expires in 2023.

“You can depend on Buhari that he will not spend one hour beyond his tenure. He will comply with the constitution,” he said.

The former Lagos State Governor spoke on Monday while addressing journalists in the statehouse after a closed-door meeting with President Buhari which was also attended by another APC stalwart, Chief Bisi Akande.

Tinubu while commenting on the security and other challenges plaguing the nation at the moment, said the government is working assiduously to arrest the situation as no leader wants the people to suffer.

Though he acknowledged the enormity of the challenges, the APC leader expressed the belief that the government will find appropriate solutions and therefore urged Nigerians to be patient and cooperate with the government.

He said, “The best way forward is what we are doing; coming together to reduce banditry, to move for unity and be able to bring a better Nigeria to the people. The welfare of our people is extremely important.

“Yes, every nation will go through these curves and difficult times. How we communicate it to the people; what are the areas to help make things easier for people? Those are the ideas we have to exchange with the leadership of the country.”

“There’s no President or leader that will want his nation fractured by tribalism, religious differences and all that. It calls for serious management and serious evaluation and dialogue once in a while.”

On the alleged frosty relationship between him and the President, Tinubu declared that it is just a figment of some people’s imagination, noting that if he doesn’t physically visit the Aso Rock, he has other ways of communicating with the President which may not be known to the public.

“There is nothing like unhealthy relationship between us. Who is our doctor? Is it social media that is measuring the relationship?

“I don’t have to disturb him openly on camera; is it? No, we have so many ways to look at issues. We have nothing like that.”

He added that he has a “very close and cordial, frank and honest” relationship with Buhari.

Meanwhile, the Lagos Government has rejected claims that it is seeking to protect a former governor of the state, Bola Ahmed Tinubu, with the anti-graft law it recently signed.

Recall that Governor Babajide Sanwo-Olu signed a law establishing an anti-corruption agency with “exclusive” rights to probe cases of corruption that have to do with the state.