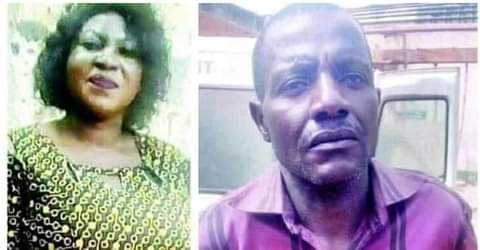 A housewife whose name is revealed as Priscilla Kwange, has in a bid to escape dying without a child got herself pregnant by sleeping with her son-in-law.

Naija News understands that Kwange had visited her son-in-law’s house to babysit a new baby boy on behalf of her deceased stepdaughter when she made the son-in-law sleep with her.

The housewife who has been longing to have a child of her own while confessing to the abominable event said she cannot but blame herself for falling into such a temptation but then the deed has been done. Kwange admitted her reason for teasing her son-in-law was to test her fertility status since there was a golden opportunity.

According to her, sticking to her husband in the past ten years has not yielded any result as she could not conceive.

She said: “I’m not proud of myself because apart from being a housewife, the victim is my son-in-law. My reason for teasing him was to test my fertility status since there was a golden opportunity and sticking to my husband in the past ten years has not yielded any result. I wanted to be sure of where the problem lies. Unfortunately, I took in. It was a wrong decision but I didn’t want to take the risk of aborting the baby as it may not come my way again.

“Although, I didn’t want it made public, my husband has succeeded in exposing it. I admit I am guilty of allowing my son-in-law to impregnate me but I was also considering my condition, even though I never expected pregnancy of  come. But since it has come, I will want to keep it even if he decides to push me out of his house, I can’t afford to die childless.”

The son-in-law, Christopher Chori who is a civil servant in Lagos, Nasarawa State, confessed how cold weather during the rainy season made him fall for the temptation of his mother-in-law.

Naija News understands that the condemnable event has forced the father-in-law, Mr. Silvanus Kwange into lamentation on what to do with his wife who relocated from their family home in Taraba State to babysit for the son-in-law. For the seven months that Mrs. Kwange was babysitting for his son-in-law in Lafia, she did not meet or collabo with her husband.

Mr Kwange in his lamentation regrets asking his wife to go to her son-in-law’s house to babysit the child of her stepdaughter who died after childbirth.

Mr Kwange revealed that it was about seven months since he last saw his wife. He noted that they only communicate on phone. He continued “I know the importance of her coming to stay in Lafia for some period of time, to take care of the newborn baby whose mother (who is my daughter) is late. I thought it was my own responsibility to help my son-in-law and the new baby of my late daughter. So, I allowed my own wife to come and help. Is that an offence?”

He continued “Two weeks ago, a friend ran into my wife in Lafia and called to tell me that he saw her with bulging stomach. I was speechless with shock and asked, how come? I didn’t want to believe it or confront her on the phone. She has been here since June last year. I decided to visit them to also see how the little boy is doing. I was coming with so much joy, not knowing that I was coming to meet disaster waiting for me. When I got to the house of my son-in-law, I met the shock of my life as I saw my own wife with a protruding stomach. I stood transfixed to the spot as I looked at her, trying to recall if there was any time she told me she was pregnant but I could not remember”.

“I quickly asked my wife what happened and she broke down and confessed that Mr. Chori seduced her and they had sex and it became frequent and the result was the pregnancy. She started begging me for forgiveness. She said that she actually allowed him to have his way as a way of checking her Fertility Status and it turned out to be this way and that she refused to abort it because She Has Spent 10 Solid Years with me without a child. She said it is almost getting late as she is no longer getting younger”.

“She pleaded with me not to cause her any embarrassment or disgrace by exposing her to ridicule and shame. She actually begged me to handle the matter in a mature way, but I’m yet to get out of the shock seeing my own wife impregnated by my own son-in-law. My anger knows no bounds. If it were during my days as a military man, I would have used my gun to kill the two of them, but if I do that now, I will be taking the law into my hands. What I will do now is to go back to Taraba. I have asked my wife not to come back to my house. As for Christopher Chori, I leave him to his conscience.”

Speaking further on his role in the devilish act, Chori said: “After the death and burial of my wife, my mother-in-law came to stay with me here in Lafia, to help look after the baby because my mother is no longer alive; she died many years ago. I work with one of the federal government agencies in Lafia. My younger sister who is equally staying with me is in SS2 and could not combine her studies with taking care of the baby.

“So my father-in-law asked his wife to come because his first wife who happens to be my real mother-in-law is late”.

He continued: “I live in a two-bedroom apartment. So when she came to take care of the baby with the assistance of my younger sister, I left one of the rooms for them to use while I stay in the other room but I come home regularly to check on them and to ensure that she does not lack anything especially when my younger sister is out in school”.

“In the first one month of her stay with me, nothing happened but during the second month, which was July 2019, something happened that left me with so much guilty feelings. My sister went to school. I did not go to work that day, leaving me and my mother-in-law alone in the house. It rained the previous night all through and the weather was very cold. I was checking on them in their room to see how my newborn baby was doing. But when I opened the door, I was shocked to see my mother-in-law almost naked as she wore only lingerie with no underwear. I could clearly see the outline of her firm breasts and her private part”.

“I tried to turn back but she said I should come in. When I hesitated, she walked up to me and grabbed me, asking me why I was behaving like a small boy. She asked whether she was not looking attractive to me. I told her I could not do what she had in mind with her as I saw her as my own mother as well as mother-in-law”.

“But she disabused my mind and insisted that I must sleep with her. As a human being, I fell for the temptation and slept with her that day, and somehow it continued at any given opportunity. It became a daily routine as I was not going to work regularly. As soon as my sister leaves for school and the boy is able to sleep, we would stay indoors and have sex all day and it later resulted in pregnancy but she refused to abort it”.

In another news, Naija News reported that a couple has cried out after the wife could not get out of orgasm after hours of sex with her husband.