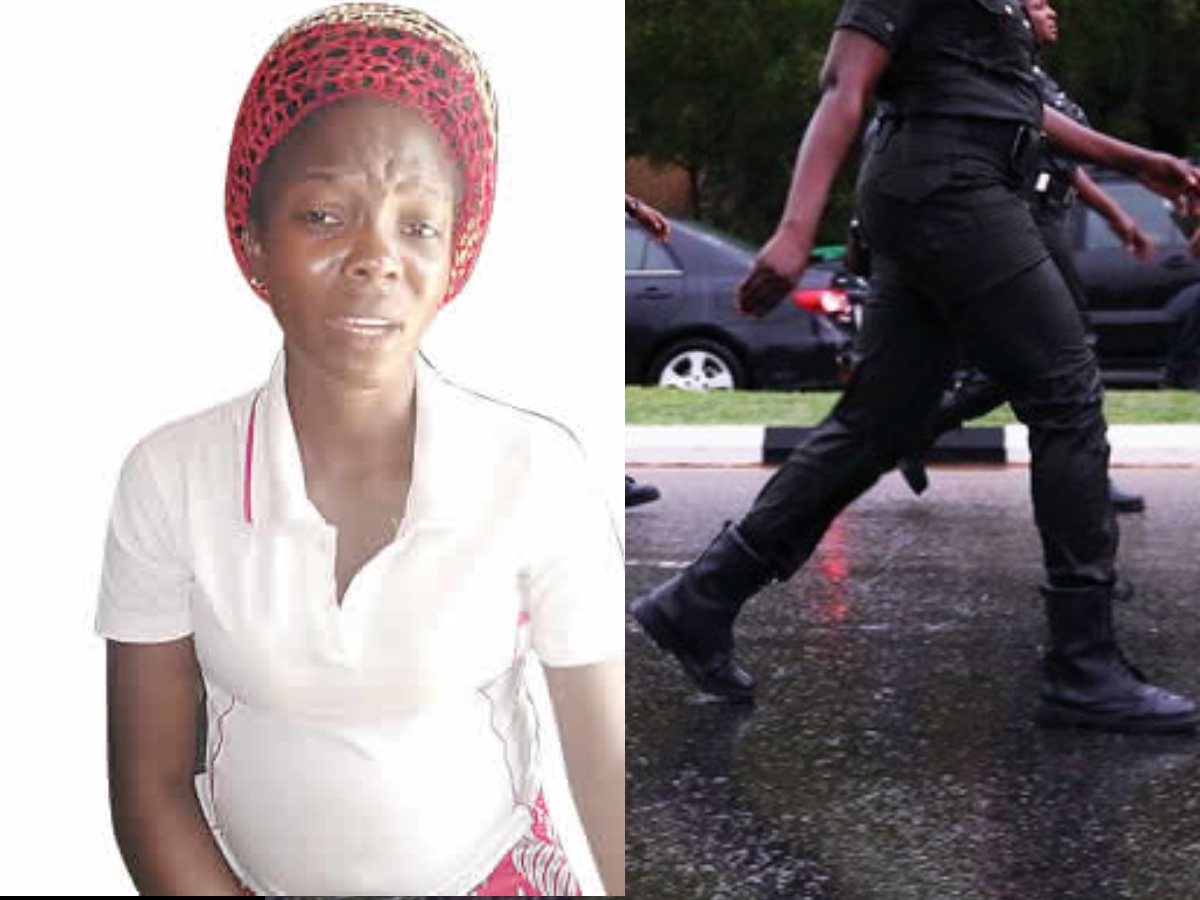 One Chinaza Azuatalam, a resident of the Okuku community in Owerri West Local Government Area of Imo State has accused her in-laws of killing the father of her unborn baby.

Narrating her horrible experience to newsmen in an interview earlier, the pregnant woman revealed how Chioma, a serving policewoman who happens to be her husband’s sibling stormed their house on Tuesday, April 13, to descend on her despite her condition.

The 24-year-old woman who is still receiving treatment on a hospital bed revealed that her husband, Chinonso Azuatalam (a welder by profession) had gone out to his workshop located in Okuku on that faithful day when his sister Chioma attacked her in their home.

Naija News learnt that Chinonso upon his arrival at home from work after the distress call, met his neighbours trying to rescue his wife from his sister. The deceased reportedly attempted to stop the assault on his wife but that his sister instead called three of their siblings on the phone to join her in the fight.

The pregnant woman who spoke in a broken voice added that on arrival, his three brothers-in-law identified as Chibuzor and twins; Mishark and Shedrack allegedly descended on her husband.

Chinaza alleged that one of the twins used a big stick to hit her husband in the head and he fell down immediately.

She explained further that her husband’s immediate younger brother, Chibuzor, used a machete also to inflict a deep cut on his forehead causing him to loses consciousness. According to Chinaza, contrary to the reports that her husband died in a hospital, he actually gave up the ghost before he could get medical help.

The pregnant widow further alleged that her in-laws were also threatening her life after purportedly killing her husband. Her statement obtained by The PUNCH reads: “I married Chinonso in 2017. He was until his death a welder and the first son of his family. We had two daughters together, Munachi and Amara and I am currently seven months pregnant. My husband, daughters and I ate breakfast together that day before he left for his workshop. Not long after he left home, my sister-in-law, Chioma, came to our house and started beating me. She abused me and was beating me before some villagers came to my rescue.

“My husband whose workshop was not far away from home was contacted and he quickly rushed home. On arrival, he started protesting and his sister, a police officer, who always boasted of how connected she is, quickly called three of their siblings on the phone to come to our house. They came and started beating my husband. As they beat him, one of the twins hit him with a big stick and his immediate younger brother used a machete on him and he had a deep cut on his head and collapsed immediately.

“People started shouting that they had killed my husband and started crying. I wanted to come out from where I hid but some people quickly held me and the children back. My husband died before some villagers took him to a hospital in Umuguma where he was pronounced dead by doctors.

“The death of my husband was painful because that was not what I bargained for with him. Where do I start from? The incident has crippled me and it looks as if my world has stopped moving. It looks as if the world is against me now. It looks as if I am still in a dream and hoping to wake up in no distant time to realise that this episode is a movie scene.’’

The woman who said that she dropped out in secondary school said, “My husband’s maternal uncles came on Sunday and pleaded with him to allow his immediate younger brother to continue using their father’s shop. Also, his siblings teamed up to share their father’s belongings in her husband’s absence. The development was vehemently opposed by my husband.’’

Chinaza alleged she had also faced opposition from her mother-in-law whom had mocked her several times for not having a male child.

She stated, “They teamed up to kill my husband and they have succeeded. My sister-in-law always boasted that she would deal with me and my husband and nothing would happen.”

Asked what she wanted upon her husband’s death, she said, “I want my in-laws to bring back my husband. I am only a housewife. My husband was the breadwinner. He was the one who took care of our daughters. I want justice. I want the government to come to my aid. I want my children’s education to be taken care of. My husband was awaiting the arrival of the baby in my womb. But it’s unfortunate that he did live to see his unborn child. I want justice for my husband. I want the government to establish something for me so that I can take care of my children.’’

The widow said that she would not consider staying with her husband’s family, adding that she cannot be safe with them. She added: “Nigerians should come to my aid. Nigerians should not allow hunger to kill me and my children. I don’t know how to feed my children and myself or take care of my baby when I give birth. I want my husband to get justice even in death.”

The deceased’s uncle, Amadi Azuatalam, who spoke to our correspondent when he visited the place where the murder took place, said that he was also not spared from what he described as his nephews and nieces troubles.

He said, “Their father was my elder brother and he died in 2019. His children took over his lands and property. The truth is that I am not spared of the children’s troubles. The police officer among them once locked up my family members.”

On his part, when interviewed, the president of the community, Martin Daniel, said that the community was working closely with the police to ensure that there was no further breakdown of law and order in the community.

Daniel said though the incident was regrettable, the community had moved in to curb negative events in the area.

He said, “What happened in our community was regrettable. It was unfortunate that the family didn’t manage their differences well. The incident happened and our own as a community is to ensure that we work closely with the government to ensure that there is no breakdown of law and order.”

He promised that the community would monitor the development of things regarding the matter to ensure that justice was served. Naija News understands that the PUNCH investigated the incident further by visiting the Azuatalam family house, but found no one at home at the time.

However, upon inquiry, it was discovered that the police arrested the policewoman while others, including the twins and their mother, were on the run. Contrary to Chinonso’s wife confession about the incident, a second son and one of the siblings to the deceased told newsmen that he had no hand in the death of his elder brother.

He accused the deceased of using the machete to inflict a cut on his hand. Chibuzor added that the deceased refused to accept the formula in sharing their late father’s wealth.

He said “I didn’t kill my elder brother. He was the one who inflicted machetes cut on my hand. It was while trying to further inflict injury on me that one of the twins hit him with a stick. He fell and we rushed to a hospital at Umuguma behind the police station. He was referred to another hospital on Owerri-Okigwe Road at Orji. It was there that the doctors confirmed him dead.”

On the disagreement in sharing their father’s property, Chibuzor said, “Upon the death of our father, we were left with three and half plots of land because we sold one plot to facilitate his burial. After the burial, we contributed money and bought a plot of land, making it four and a half plots of land. A family meeting was held and it was agreed that the first son should take a plot and half while the remaining three of us who are males should take a plot each. But our eldest brother disagreed and insisted he would take two and a half plots. It was agreed that the male children should continue to live in our father’s house until we build our own houses and leave the house for the first son. But he found that uncomfortable.”

Chibuzor also denied the allegation that her sister, who is a police officer, beat the deceased’s pregnant wife.

Reacting to the development, the state police spokesperson, Orlando Ikeokwu, who said that the command had swung into action, adding that two of the siblings, including the female police officer, had been arrested.

Ikeokwu said that a report available to the police indicated that the deceased was after his mother to kill her over disagreements in the sharing of their father’s property.

“Preliminary investigation reveals that the late Chinonso was protesting the formula used in the sharing of their father’s property. As a result of which he took a machete and threatened to cut his mum. His sister, Chioma Emenyionu, then called their other brothers, Chigbu, Mishark, and Shedrack Emenyionu, all of whom arrived at the scene and descended on the late Chinonso and beat him to stupor. Consequently, he was rushed to the hospital where he was confirmed dead. However, the corpse has been deposited in the morgue, while effort is on to arrest the other fleeing suspects. An investigation is ongoing,” the police spokesman noted.