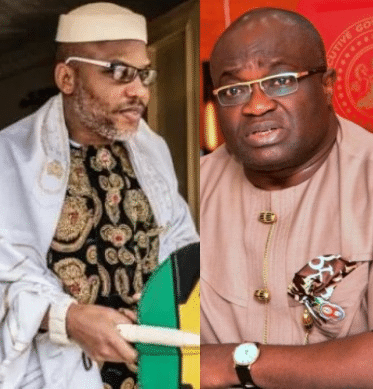 Governor Okezie Ikpeazu of Abia State has cautioned the leader of the Indigenous People of Biafra, Mazi Nnamdi Kanu and followers against instigating a civil war in the country.

Naija News understands that Ikpeazu while speaking during his visit to the Osasu Igbinedion pan-African television studio in Abuja on Thursday evening, alleged that all southeast governors have been placed under Fatwa (death sentence) by the IPOB.

The southeast governor however hinted that violence would not favour anyone, admonishing the Biafra agitators to explore dialogue and peaceful ways to seek redress.

Ikpeazu though admitted that issues of marginalisation and inequality raised by the IPOB leader are valid, the governor, however, faulted the strategy being employed by Kanu. According to him, he does not understand how Kanu wants to achieve his break-up call.

He said, “People are beginning to think now that some of the issues raised by Nnamdi (Kanu) are, if they were issues of injustice, marginalisation and inequality, any part of society has a right to begin to feel cheated or unwanted.

“So, some of those things which Nnamdi said are valid. Some of us can see it. We cannot continue to hide behind a finger. But some of us do not subscribe to his style or strategy, because I do not understand where he is going and how he is going and when he plans to pull the break (-up) and what he wants to achieve.

“If I have a way of conveying my views to the leadership of that group, what I will say is that they should find a way to enter into conversation and let people know.

“I am under their fatwa now and some of my brother governors. They say, ‘If you see them, kill them.’”

Ikpeazu added: “They are fighting in the kitchen; by the time the war in the kitchen ends, mama’s pot of soup would have spilled, there will be no plate to eat and everybody would be hungry and eventually it would not serve any good purpose. I don’t understand their strategy,”

Speaking on the issues of insecurity in the country, Ikpeazu said the government needs to addressed insecurity holistically, calling for a change of strategy in the prosecution of the war against insurgents and bandits.

Igbinedion, in her remarks during the visit, lauded the governor for empowering women and youths, Naija News reports.