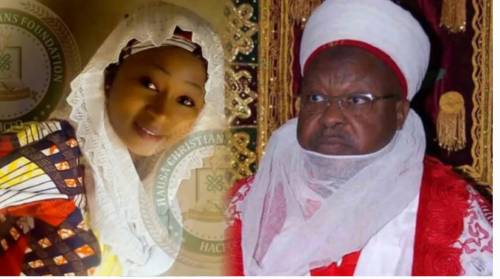 The Hausa Christian Foundation (HACFO) has alleged that the Emir of Katsina, Abdulmumini Kabir, has illegally married off a Christian teenager identified as Aisha Mani, to her abductor, Mohammed Samaila, without the permission of her family.

The foundation in a post on Facebook disclosed how the monarch with support from the District Head of Kafur Local Government Area (LGA), Abdulrahman Rabe, carried out the act.

It was gathered that the Emir married off the teenager to her abductor despite efforts from the police and a petition by a law firm.

It was reported that the family of Aisha relocated their daughter from Gidan Dandada, Rafin Iyaka, to another relative in Funtua after they suspected romantic advances from Samaila.

However, Aisha was reported missing from Funtua and after long hours of searching, the case was reported to the police.

“Two days later, on February 12, 2021, Aisha’s parents received a call from the District Head of Kafur telling them to stop searching for Aisha because she is safe with him in his house. He claimed that one Idris Shehu brought her to his house,” HACFO said.

Rabe was said to have disregarded her family’s plea that she be returned and refused them access to see Aisha “on the ground that she wanted to convert to Islam.”

The traditional ruler reportedly called Aisha’s parents after ten days, stating that her abductor wanted to marry Aisha, but they refused, insisting that due process must be followed.

Subsequently, Rabe “went ahead to arrange a marriage between Aisha and Mohammed Samaila without the consent and approval of Aisha’s Family.”

“The Area Commander told the District Head not to go ahead with their marriage plans between Aisha and Mohammed Samaila, but the district head ignored it,” the NGO said in its report, adding that the agreement was that Aisha is brought to the police station, one which the District Head ignored.

HACFO said the girl was instead taken to the Emir of Katsina the same day the district head was supposed to take her to the police station, adding that “on reaching there, the Emir of Katsina joined Aisha and Mohammed in marriage without the consent of her parents.”

The group further stated that the incident was not the first case, as the Muslim community forcefully abducts Christian daughters for marriage without parental or family consent.

The NGO further stated that a total of nine girls have been abducted and forced into marriage. One of such ladies was said to have been returned after she ran mad, another returned dead, while another was returned to her parents with pregnancy.

Names of other abductees, according to the NGO, are Jamima Solomon, Christiana Mamman, Deborah Habila, Phoebe Dankano, Rifkatu Markus, Saratu Isah (Returned her when she went mad after two years), Dije Yakubu Nalami (Abducted as a married woman, and returned when she died), Rebeccah Ado (Returned Pregnant) and Aisha Mani (Currently in captivity).

The foundation alleged that crimes against Christians “are always swept under the carpet” in Rafin Iyaka Sabuwar Kasa, Kafur Local Government Area of Katsina.

It noted that despite a petition filed by lawyers to Aisha’s parents to the police through the Malumfashi Area Command, demanding the arrest, investigation and prosecution of Rabe and Samaila, the police had done nothing to secure the release of Aisha.

HACFO claimed that Kabir and Rabe, on several occasions, abuse human rights and “do everything possible to stop the constitutionally recognised law enforcement agencies like the police from rightly carrying out their statutory duties.”

The NGO claimed that Mr Rabe had been involved in supporting similar acts right from the time of his father, who died years ago and “is also backed by the Emir of Katsina.”

The spokesman of the command, Gambo Isa, when contacted by the Peoples Gazette, claimed that he was not aware of the incident.

“I’m not aware of the matter; I don’t know because it was reported by an NGO if it is something reported by a tabloid…, but I cannot confirm the NGO’s report,” Mr Isa said.

According to the news platform, the spokesman of the Emir is yet to reach out on the incident.