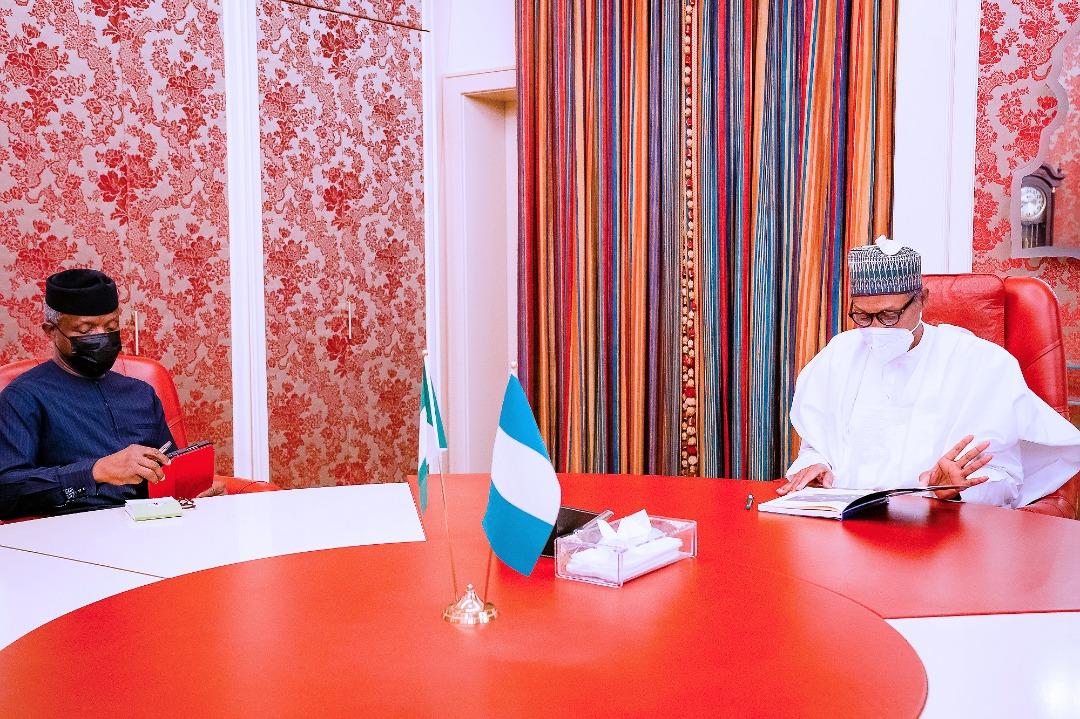 Vice President Yemi Osinbajo on Monday, briefed President Muhammadu Buhari on happenings within the past few days when he was in London for a medical check-up.

The meeting between the two leaders held at the Aso Rock Presidential Villa in Abuja, Naija News reports as confirmed by the senior special assistant (media and publicity) to the Vice President, Laolu Akande.

It will be recalled that President Buhari returned to Nigeria last week Thursday after a two-week medical trip to London, the United Kingdom.

A tweet on Monday by Akande revealed that Vice President Osinbajo and President Buhari held a meeting during which the President was briefed on a number of issues including FEC meetings that held in his absence and other issues of national importance.

“Mr. President got a briefing from VP today, having represented him on a number of events & issues in last couple weeks, including presiding over FEC meetings. VP had also represented the President at a virtual Africa Regional Commonwealth Leaders Round Table presided over by Prince Charles last Thursday.”

Mr. President got a briefing from VP today, having represented him on a number of events & issues in last couple weeks, including presiding over FEC meetings. VP had also represented the President at a virtual Africa Regional Commonwealth Leaders….(Photo by Tolani Alli)… pic.twitter.com/GPlYtz1lWi

Meanwhile, the federal government of Nigeria has shed more light on what transpired between the central and state governors as regards the allocation sharing for March 2021.

The Minister of Finance, Budget and National Planning, Zainab Ahmed disclosed that when it was discovered that there was a shortfall of N50 billion from the Federation Account Allocation Committee (FAAC), the state governors wanted the federal government to borrow the shortfall from the Central Bank of Nigeria (CBN).

She however disclosed that the federal government rejected the idea of the state governors and insisted that they go manage what each of them got.

Ahmed also disclosed that the government usually takes money from reserve accounts but in March, there was no sufficient fund accrued in those accounts.

She made the revelations on Monday during an appearance on ‘Good Morning Nigeria show’, a Nigeria Television Authority (NTA) programme while reacting further to claims by Governor Godwin Obaseki of Edo State that the government printed N60bn t augment the March FAAC distribution to states.