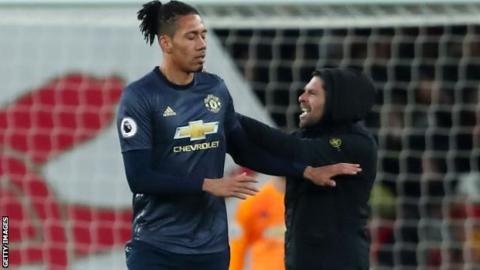 The Italian residence of former Manchester player, Chris Smalling, was invaded by gunmen in the early hours of Friday.

It was gathered that the footballer was in the residence with his model wife and their two-year-old son when three masked men stormed their house and forced him to open the family’s safe.

The armed men force the former Manchester United player to hand over his Rolex watch, and other valuables from the safe.

Smalling’s wife, Sam made a call to the police around 5 am and officers arrived at the family’s villa, located 25miles south of Rome.

The police are still investigating the incident and Roma has offered to support the player.

The couple have been married since June 2017 and welcomed their first son, Leo, just before they moved to the Italian capital

The defender has been playing in Rome since the summer of 2019.