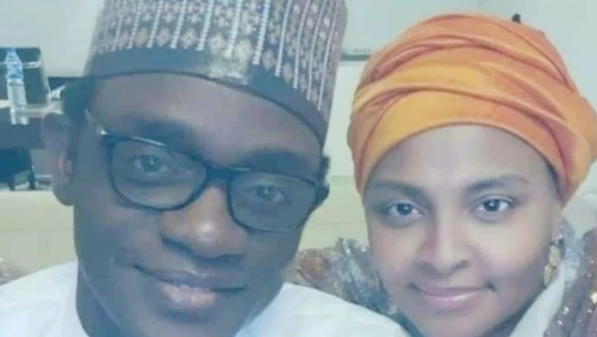 The Caretaker Chairman of the All Progressives Congress (APC) and Governor of Yobe State, Mai Mala Buni, has tied the knot with Gumsu, daughter of the late dictator, Sani Abacha.

Naija News gathered that the wedding took place on Wednesday at the Abuja residence of Mohammed Abacha, the bride’s elder brother.

Gumsu was previously married to Cameroonian multi-billionaire businessman, Bayero Fadil Mohamadou but the 20-year-old relationship is said to have hit the rocks due to irreconcilable differences.

It was gathered Buni’s marriage to Gumsu was a low-key affair so as to avoid public backlash. She is now the governor’s fourth wife

Shortly after he assumed office in 2019, Buni married Ummy, a daughter of his predecessor and incumbent Yobe East Senator, Ibrahim Gaidam.

Present at the wedding is the  Comptroller-General of the Nigeria Customs Service (NCS) Hameed Ali attended, APC chieftains, notable personalities, and government officials.

Meanwhile, a former aide of ex-Presidents Goodluck Jonathan and Olusegun Obasanjo, Doyin Okupe has asked the Peoples Democratic Party (PDP) to not zone its 2023 presidential ticket to the north.

There have been calls that the two major political parties – PDP and All Progressives Congress (APC) – should zone their presidential ticket to the south.

Some political bigwigs have also called for the major parties to micro-zone their tickets to the South-East ahead of the election.

In a post on Twitter on Thursday, Doyin Okupe warned that if a Northern president emerges as President after President Muhammadu Buhari’s tenure then it is possible for the north to rule Nigeria forever.

Okupe also proposed the adoption of a policy concession in order to satisfy the South West region for a South West president to emerge.

He wrote: “If PDP picks a Northern candidate for the 2023 elections and because the Nigerian electorates are still largely parochial, that candidate wins at the general elections, then the north will rule for another 8 years, making it 16 years at a stretch.

“If this type of ” clever political manoeuvering,” is employed to alternate northern candidates between political parties, then it is possible for the north to rule the country in perpetuity.”