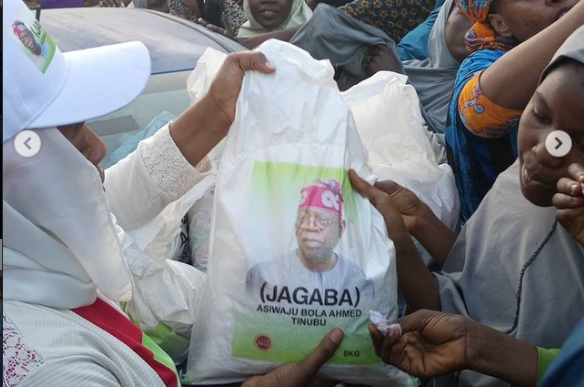 National Leader of the All Progressives Congress (APC), Asiwaju Bola Tinubu has declared that he is not responsible for the bags of rice depicting his face currently being distributed in some states in the northern part of the country.

Tinubu in a statement on Thursday evening through his media team noted that he has become aware of the rice distribution with his face emblazoned on the bags, but he is not the one behind the initiative.

The APC chieftain, however, commended those behind the initiative noting that their acts of charity particularly in the holy month of Ramadan is highly appreciated.

The statement which was also retweeted by Tinubu reads: “We have seen the images being circulated of bags of rice depicting Asiwaju’s face being distributed across parts of the North.”

1. We have seen the images being circulated of bags of rice depicting Asiwaju’s face being distributed across parts of the North… pic.twitter.com/hiZHjP3ACi

It will be recalled that Naija News reported earlier that loyalists of the national leader of the All Progressives Congress, Bola Tinubu, has started distributing branded bags of rice and other food items to residents of Kano State.

Residents of Kano were seen in videos and photos carrying bags of rice with the inscription ‘JAGABA – Asiwaju Bola Ahmed Tinubu’.

This is coming amid the claim that the former Governor of Lagos State has presidential ambition ahead of the 2023 general elections.

There are claims that the action of the APC leader is to gain support from the North. Recall that Tinubu celebrated his birthday in Kano State last month.

Tinubu had also been to Kaduna and Katsina states, which are among the states with the largest voting populations in the country.