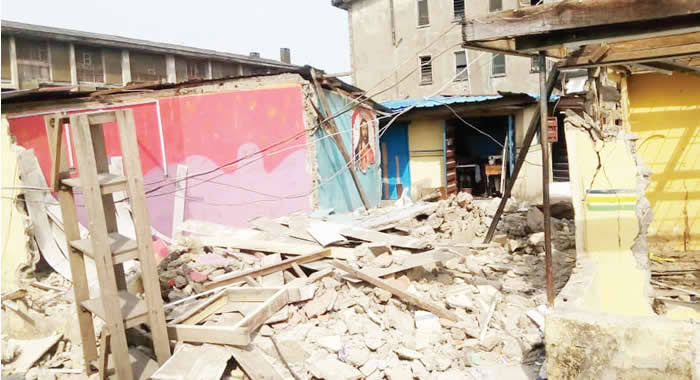 The demolition of shops at the Pedro market in the Somolu area of Lagos by the Police Officers’ Wives Association, POWA, has landed a trader in a critical condition.

Naija News learnt that one Mama Esther, a trader at the market slumped after the association stormed the market and wrecked her shop.

Reports revealed that POWA had earlier given the tenants in its market at Pedro a two-week notice to vacate the premises for demolition but that the occupants refused to act positively.

The demolition Naija News understands was to pave way for the construction of an ultra-modern market at the site by a developer. However, at the expiration of the two-week notice on Thursday, April 8, 2021, shops in the market were demolished.

The development, however, landed Mama Esther on hospital bed after she got to the market and saw the wreckage of her shop and goods.

One of the traders in the market, Dupe Audu, said all entreaties to extend the vacation notice fell on deaf ears of POWA officials as they threatened to ensure the transfer of their husbands to the North-East if they refused to vacate the market.

She said, “We were surprised to see the POWA officials in the market when they came to give us the notice. They went around the market and when they came back to address us, they said we should all vacate our shops, because they wanted to rebuild the market.

“When we asked them to give us time to get a better place, we were told to leave within two weeks or our goods would be thrown out and the shops would be demolished on our heads. We thought it was a joke. We were also asked to pay N700,000 each if we wanted to get our shops back after the market had been rebuilt.

“We were still looking for space when they came to the market and started removing the roofs and demolishing shops; they also threatened policemen’s wives, who were in the market, that if they didn’t vacate their shops, their husbands would be transferred to Maiduguri and other states in the North-East.”

Another trader, Zainab Busari, who alleged that they were not given written notice, said the POWA officials were accompanied by the Divisional Police Officer of the Pedro Police Station.

She stated, “When the POWA officials stormed the market on the day, it was like a war; everybody was running helter-skelter. A few minutes later, we saw some people removing the roofs and pulling down the shops; some traders’ goods were thrown on the road.

“We were not given an official notice of two weeks; we were just told verbally that they were coming back in two weeks and when they eventually arrived, the Divisional Police Officer of the Pedro Police Station accompanied the POWA officials when they were carrying out the demolition. We are not saying we are not leaving the market, but they should give us more time to get a better place.

“One of the traders, whose shop was demolished with her goods inside, was rushed to hospital after she slumped. They should have mercy on us, because that’s where we make our livelihoods and support our husband’s.”

She said, “I have been in the market for years; the shops are in good shape; they are not in distress, so why the demolition? We are all Nigerians, we should have sympathy for each other; they should give us time to organise ourselves even if they want to pull the market down.

“Some of us are widows, our husbands served the country meritoriously; what we are selling here is to assist our husbands at home. We were also told to pay N700,000 if we wanted to get the shops back after they had rebuilt the market, but where do they expect me to get the money from? I can’t afford such an amount now.”

Mba, however, said he was not aware of the matter but promised to find out exactly what happened and get back to our correspondent.

He said, “I don’t deal with the day-to-day activities of POWA; it is a non-governmental organisation properly registered, but when I’m properly briefed, I can speak on issues concerning them, but now, I don’t have the information; it is news to me and as a matter of fact, I am hearing of it for the first time as you’re speaking to me.

“I will try to find out exactly what has happened and once I have my facts, I will speak to you.”