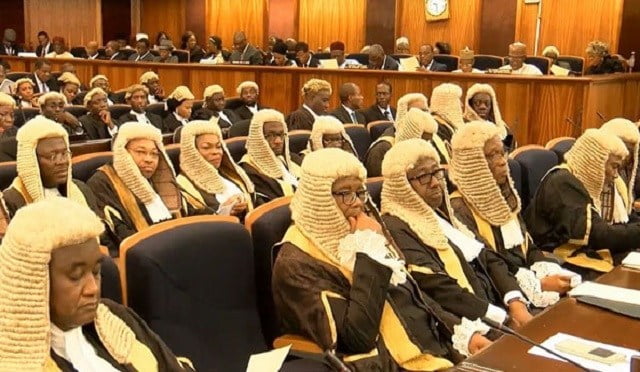 The Christian Association of Nigeria (CAN) has accused President Muhammadu Buhari of polarising the country through alleged lopsided appointments.

Recall that the National Judicial Council (NJC) had in March recommended 18 judges to Buhari for elevation to the Court of Appeal.

Reacting to the development, CAN National President, Samson Ayokunle, said that out of the 20 judges recommended, 13 were from the North and 7 from the South.

Responding, Nigerian Supreme Council for Islamic Affairs (NSCIA), in a statement signed by its Deputy Secretary-General, Salisu Shehu, had said that CAN was disseminating “scurrilous propaganda”.

The council argued that there are 70 justices of the court of appeals (JCAs) — 34 from the north and 36 from the south — and that the three geopolitical zones of the south have two Muslim JCAs, while the zones of the north have 15 Christians.

However, CAN has responded to the Islamic council statement, saying its colleague has “unwittingly exposed itself as a promoter of bad governance, divisiveness and injustice in Nigeria under the Buhari administration”.

In a statement issued on Sunday by its General Secretary, Joseph Daramola, CAN challenged the federal government “to publish the names, state of origins and religions” of those who have held the positions of chief justice of Nigeria, appeal court president, and chief judge of the federal high court since 2015.

He said: “The council was smart by half when it picked an example of just one arm of government without addressing the totality of fundamental questions on all the arms of government.

“Is it falsehood or character assassination that the Security Council of the country has remained an appendage of NSCIA under the watch of President Muhammadu Buhari?

“The constitutional position is that all of us, Christians and Muslims are stakeholders in this country, and votes were not collated on the basis of religion. So for the government to bend or lean towards Muslims in its appointment of Security Chiefs is unconstitutional and doesn’t take into consideration the varied interests of other ethnic and religious groups.

“Why did the Council remain evasive on the big issue of the Court of Appeal? Interestingly, there was never a time when CAN ever attack or made a veiled reference to NSCIA over the obvious lopsided appointments in the country.