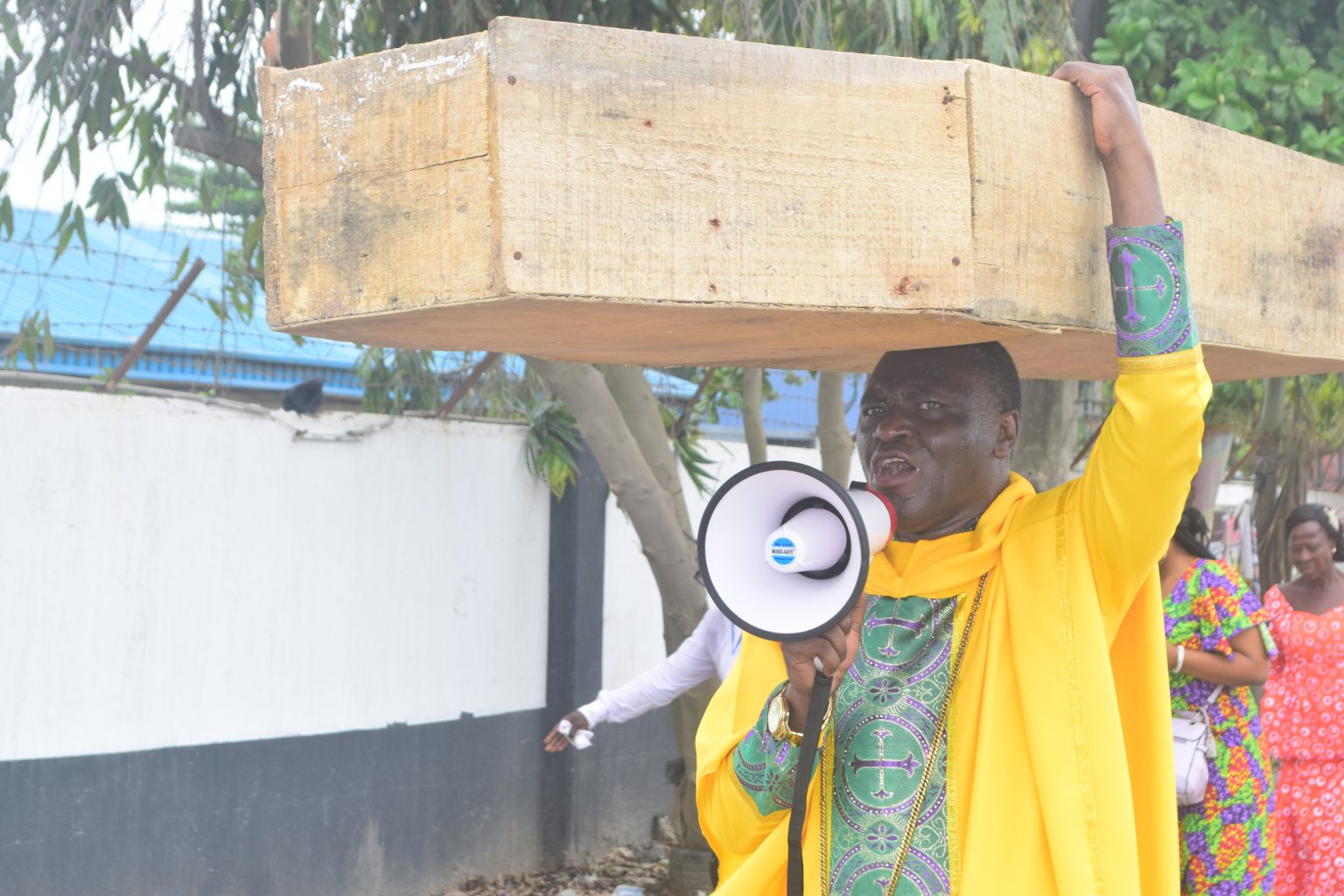 A Nigerian clergyman identified as Jehovah Sharp Sharp has claimed God told him to carry a coffin around as a sign of anger with President Muhammadu Buhari‘s government.

Naija News understands that Archbishop Samson Benjamin of the Resurrection Praise Ministry, a denomination that has its base in Lagos, carried out a demonstration on Sunday, April 11 with a coffin on his head which according to him signifies God’s anger with the Nigerian government.

It was gathered that the clergyman marched through the streets of Festac with the casket, claiming God asked him to do so because he is unpleased with the incumbent administration and the state of the nation.

Benjamin said his action was the outcome of “a spiritual journey of more than one year”.

He said: “From the 15th of September 2019 up until this moment, I have not eaten food cooked by fire or any pleasant food, I have been seeking the face of God over this great country.

“Last week, I had a mortal vacation, which was a solitary confinement where I didn’t talk to any human to be with the cabinet of the trinity, I didn’t see the sun, moon, clouds.’

“What you are seeing me do here right now is what the Prophets of Old would do. God will ask them to carry a symbol when he wants to pass a message to the leaders of the nation.

“He said to me ‘Go and carry a coffin on your head, it is not furniture or anything for interior decoration, it is good for nothing, it is at the end of the life of a man that he is put into a coffin.”

When questioned on why he did not take the casket to the Aso Villa, the seat of power in Abuja, Benjamin said God had not asked him to do that yet.

He said: “Human rights is the right of citizens of this country, we have found ourselves in a government that sees you as an enemy when you are being constructive in your criticism.”

The self-proclaimed clergy quoted the message he heard from God saying: “Tell the leaders that they have intentionally depleted the common resources that belong to this great country and have brought hardship on the citizens, I am not happy with it.”

Benjamin admonished Nigerians to confront the leaders with the truth. He described the state of the nation as a disappointment to the Lord God almighty “who brought people of various ethnicities together and gave them the resources”.

He added: “But those in power have chosen to make the commonwealth of the country their personal property, this is the reason I am carrying this coffin, God is not happy, and he is saying it is not political leaders alone, including the religious and traditional leaders.”

“Secession cry is everywhere, the question is, Is it God’s will that all these must happen? We need to sit down at a round table and look at it again what and what put us together, whether those things are still workable today or are no longer workable”, Benjamin added.

Meanwhile, in another news earlier the Federal Government says it killed more than 329,556 chickens in 62 farms following reports of bird flu outbreaks in several parts of Nigeria, Naija News reports.

The disease, which has been reported since January 29, 2021, continues to threaten poultry farmers.