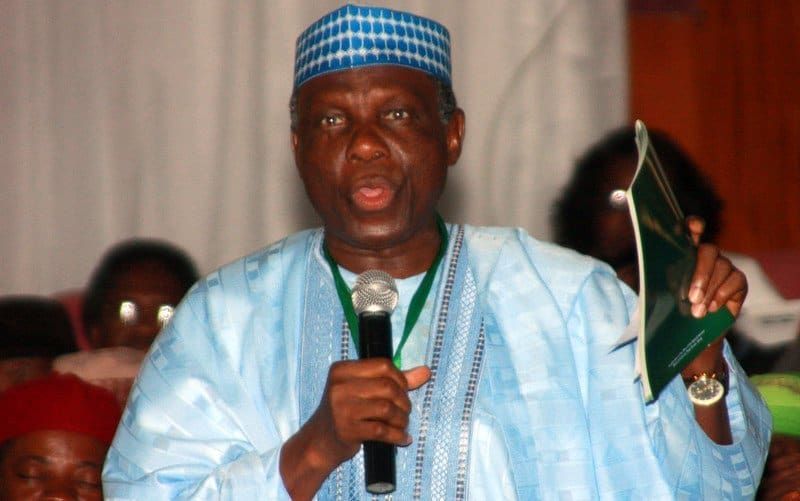 Former Minister of Information, Professor Jerry Gana has officially been readmitted back to the Peoples Democratic Party (PDP) on Saturday.

Others who joined him in returning to the main opposition party on Saturday include Barrister Humphrey Abah, Ambassador Mrs. Esther Audu, and Hon Adakole Ijogi.

Naija News gathered they were readmitted at the North Central Zonal Congress of the party taking place in Makurdi, Benue State.

The leader of the PDP in the North Central Zone, Governor Samuel Ortom of Benue State, welcomed the decampees on behalf of other party leaders.

Speaking on behalf of others, Professor Gana vowed that they will work to ensure the PDP reclaims power in all the states of the North Central Zone currently being ruled by the APC and at the federal level.

Naija News recalls that the former Director-General of the Nigeria Television Authority (NTA) was a member of the Board of Trustees of the PDP when he decamped in March 2018.

Addressing PDP members in Bida, Niger State, on Wednesday, during a reception to mark his return to the party, Gana said the ruling All Progressives Congress (APC) has failed Nigerians.

He opined that the APC and President Muhammadu Buhari has failed to fulfill the promises they made to Nigerians in the 2019 general elections.

Gana said the country is nosediving and needs urgent rescue from the Buhari-led government.

He asserted that there’s no government In Nigeria, asking the PDP to take over Niger and the country and salvage it from the deflated state that it is under the ruling APC.

Meanwhile, the People’s Democratic Party (PDP) has named former Kogi Senator, Dino Melaye as the Chairman of the Screening Committee for the South-West zonal executive congress.

The Committee has the mandate to screen all aspirants for the zonal executive committee positions.

The appointment was disclosed in a statement on Friday by the PDP National Organising Secretary, Col. Austin Akobundu (rtd.)