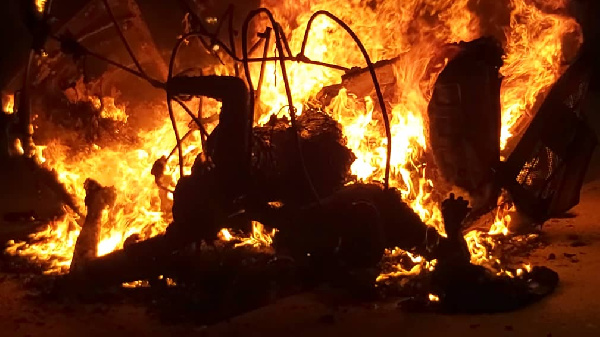 Four persons have reportedly died in a house fire allegedly set up by a man who was dumped by his lover in Ibadan, Oyo State capital.

It was gathered that one Ahmed Saka on Wednesday night, April 7 attacked the mother of his children, Mutiat at their apartment and set the building on fire, killing himself, the woman and two other children in the process.

Naija News learnt that Mutiat had been with Saka in their home in the Shogoye area in Oyo State, but recently, she declared she was no longer interested in their relationship and will be leaving him for good.

The development, however, got Saka infuriated and had since then threatened he would kill her for walking out of their marriage. Keeping to his words, Saka on Wednesday night April 7 set their home ablaze, killing Mutiat, two children, and injured four others with severe burns.

Reports revealed that apart from Mutiat and Saka, two children, Ramon Sarumi (10) and Abiodun Oladele (seven) also died in the inferno. While those with severe burns include Bisola Oladele, Lateef Sarumi, Aishat Sarumi, and Wosilat Sarumi.

The incident is said to have been reported at Mapo police station by one of the neighbours, Olaide Aliu at about 5:10 am.

This led the Divisional Police Officer in charge of Mapo and other detectives to visit the scene. After taking photographs, the police operatives also evacuated the corpses from the scene to the mortuary of State Hospital, Adeoyo, Ibadan, for autopsy. The survivors of the fire incident are said to be receiving medical attention at the Anglican Diocese Hospital, Molete.

Confirming the incident, the spokesperson of the state police command, CSP Olugbenga Fadeyi, said an investigation has commenced into the matter.

Meanwhile, a pregnant woman has reportedly stabbed her husband to death in Delta State.

Naija News reports that Mr Edafe Bright, the acting Police Public Relations Officer in Delta State, confirmed the killing in a statement made available to newsmen on Thursday, April 8.