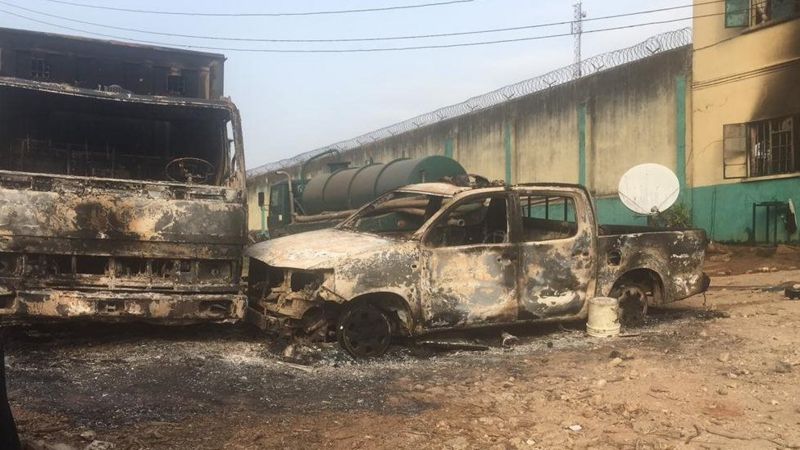 A peacebuilding organisation, Foundation for Peace Professionals, also known as PeacePro has accused the Indigenous People of Biafra (IPOB) of attacking the Imo State Police Headquarters.

Naija News reports that the accusation was made by the Executive Director of PeacePro, Abdulrazaq Hamzat.

Hamzat was reacting to the attack on the Police Headquarters in Imo State, the killing of several people, the release of about 1500 criminals in detention and the burning of several vehicles within the police premises.

He said the violent attack against police headquarters confirmed the PeacePro’s conclusion in the state of Peace report, which designated IPOB as an insurgency threat to peace, which deserves similar concentration like the Boko Haram insurgency.

Naija News recalls that the former Inspector-General of Police, Mohammed Adamu on Monday declared that members of the Eastern Security Network (ESN) carried out the attack on the Imo State Police Headquarters and Nigerian Prison facility.

He said in a statement on Monday that ESN, which is the security arm of the proscribed IPOB was responsible for the attack on the Imo State Police Command headquarters and the Owerri Correctional Prison.

The Police boss’s statement comes after IPOB had initially denied media reports that it was responsible for the attack on Imo Police Headquarters and Correctional Centre.

In a statement on Monday by its Media and Publicity Secretary, Emma Powerful, IPOB said the attacks were not carried out by operatives of Eastern Security Network (ESN).

He warned those linking IPOB and ESN to the attacks to stop because the group was formed on the principle of peace.

Buhari Will Go On Medical Trips Next Year – Lauretta Onochie