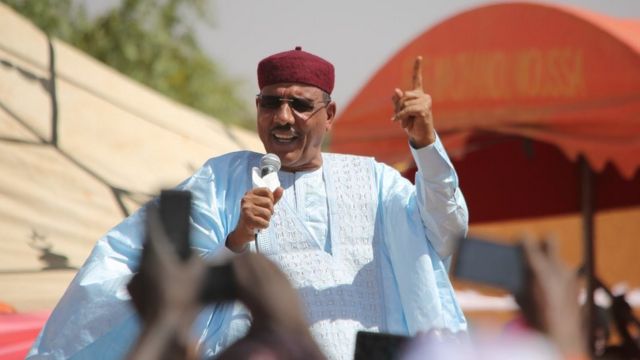 The newly elected President of the Republic of Niger, Mohamed Bazoum will take the oath of office today Friday, April 2, 2021.

It is the first time in Niger that a democratically elected government would hand over power to another elected leader, with Bazoum taking over from outgoing President Mahamadou Issoufou.

Bazoum, a former Nigerien foreign minister, won the second round of the February 2021 presidential election.

Issoufou is the first President of the Republic of Niger to complete two consecutive terms in office, from 2011 to 2021.

Bazoum has vowed to build on Issofou’s efforts to fight terrorism and revive the world’s poorest economy.

Naija News reported in March, Mahamadou Issoufou won the Mo Ibrahim Foundation Award for Africa’s most capable president, despite the fact that the Republic of Niger is poor and has other problems.

The international community and the people of Niger, whom Bazoum is pleased with, are waiting to see how he will deliver on his campaign promises.

Bazoum’s first major challenge is to stabilize the country, which had faced a military coup attempt two days before he took office.

His country has long been plagued by security threats from Boko Haram, ISWAP and other armed groups in the country and its Sahel neighbours.

Thousands of civilians and soldiers have been killed in militant attacks in parts of Niger.

Terrorists have now crippled power supply in some parts of the country, and continue to attack workers with the aim of preventing further damage.

The country is suffering from poverty as the global economy struggles since the outbreak of the coronavirus and the fall in crude oil prices that the country is now earning from.