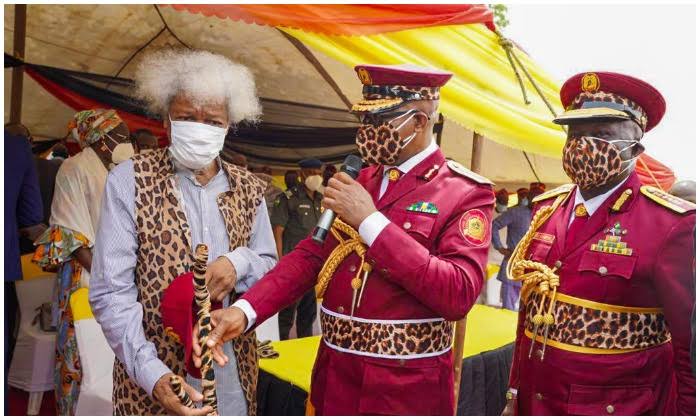 Naija News reported on Thursday, April 1, that Governor Abiodun in a bid to tackle insecurity issues in the state, especially activities of Fulani herdsmen, inaugurated the state chapter of Operation Amotekun.

To further strengthen the newly inaugurated security outfit in the state, Abiodun decorated the respected academic with some emblems of the Amotekun Corps, Naija News understands.

While decorating the Nobel laureate, the governor said, “This outfit is very close to his (Soyinka’s) heart and issues of security, particularly in the South-West.

“On that note, I have a singular honour and privilege to present Prof some of the Amotekun insignias being the Super Marshall of Amotekun in Ogun State.”

Meanwhile, the Indigenous People of Biafra, IPOB, on Thursday accused the Nigerian military and other security agents of providing cover for Fulani herdsmen killing innocent people in the South-East region.

IPOB asked why the security agents have not arrested anyone in connection to the killings in Enugu and Ebonyi State, but they were quick to deploy men and equipment to look for Eastern Security Network operatives in Orlu, Imo State, a few weeks ago.