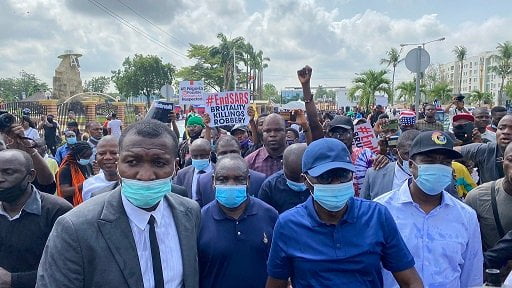 Governor Babajide Sanwo-Olu of Lagos State was reportedly disgraced on Tuesday by some youths as he was entering the Teslim Balogun stadium.

In a viral video shared by a Twitter user, @absuxxess, the youths were seen calling the governor derogatory names, even with his security details with him.

The video showed several cars leaving the premises of the Teslim Balogun Stadium, Surulere where the Super Eagles of Nigeria clashed with Lesotho in an African Cup of Nations qualifier game on Tuesday.

As the cars were leaving the premises, some youths at the gate booed the occupants with a chant of “Ole” which is the Yoruba word for thief, and also threw empty plastic bottles at the cars.

As of the time of filing this report, it could not be ascertained if the protest was connected to the Lekki toll-gate shootings that happened in October 2020.

But in a reaction to the video, Media Aide to Sanwo-Olu, Gboyega Akosile, described the tweet as false, adding that the governor’s convoy was not attacked.

He added the governor’s convoy was not the one in the video, asking Lagosians to ignore the video and stay away from spreading fake news.

“This is wrong, totally false. This is not Governor @jidesanwoolu’s convoy. Let’s stay away from spreading falsehoods. I’d implore you to correct your wrongful publication,” he tweeted on Wednesday.

This is wrong, totally false. This is not Governor @jidesanwoolu's convoy. Let's stay away from spreading falsehoods. I'd implore you to correct your wrongful publication. https://t.co/FlxAQBpyVo

Meanwhile, the spokesman of Yoruba activist, Sunday Igboho, Olayomi Koiki, on Tuesday, stormed schools to sensitise schoolchildren on the agitation for Oduduwa Republic.

One of Koiki’s representatives in a video on Facebook visited a primary school, with customised Oduduwa Republic books on which was written the proposed anthem and short notes on Yoruba culture.

The representative distributed books to the pupils.

Koiki’s representative was spotted in a classroom sensitising over 20 pupils to the customs and traditions of the Yoruba nation.

He also taught the pupils and the teachers the proposed Oduduwa Republic national anthem and encouraged the pupils to inform their parents of the struggle for the independence of the new nation.