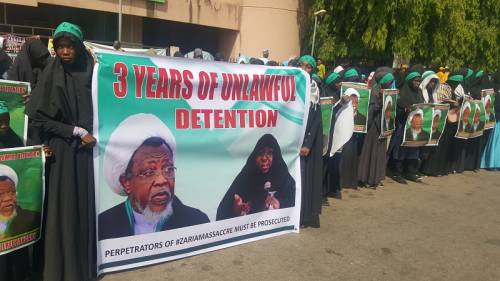 A clash between members of the Islamic Movement in Nigeria (IMN) also known as Shiites and Nigeria Police on Tuesday in Abuja has resulted in the death of at least one person.

Several other persons were also injured during the clash which occurred in the Maitama area of Abuja, Nigeria’s capital city.

One person identified as Muhsin Abdallah was reportedly killed as police attempted to disperse the IMN crowd who were protesting the non-release of their leader, Ibrahim El-Zakzaky, and his wife, Zeenat by the federal government.

The spokesperson of IMN, Ibrahim Musa, speaking on the incident, alleged that “the police fired at the Shi’ites procession killing Muhsin Abdallah and injuring scores of others.”

However, the FCT Command of the Nigeria Police was silent on the killing of one of the Shiite members.

In a statement signed by the Public Relations Officer of the FCT Police, Mariam Yusuf, police explained that the IMN members went violent, attacked innocent residents and security operatives, and also destroyed some public properties.

Yusuf noted that some police officers were injured by the protesters while a patrol van was also damaged.

“Unfortunately, the members of the disbanded sect went on a rampage destroying public property and attacking innocent citizens including Police Officers with stones and other dangerous objects.

“In view of the above, the Command wishes to state that it will not condone any form of attack on its personnel, equipment or other public property,” the statement read in part.

Also on Monday, the Police and the IMN members clashed in Abuja while the group was protesting the continued detention of their leader.

Monday’s protest was to mark the 70th birthday of their leader.

Meanwhile, President Muhammadu Buhari has ordered the security chiefs to hunt down and kill bandits, Boko Haram insurgents, and their sponsors terrorizing the North and the country as a whole.

Briefing State House correspondents on Tuesday, National Security Adviser (NSA), Babagana Monguno, said the President gave the order during his meeting with the service chiefs at the Presidential Villa, Abuja.

Monguno quoted Buhari as saying that his administration would no longer accept the reign of terror unleashed on parts of the country by bandits, kidnappers, and Boko Haram insurgents.