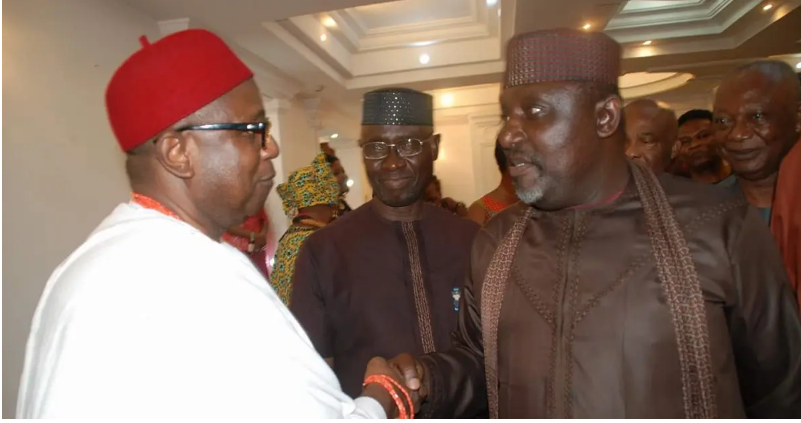 The traditional ruler of Obinugwu in Orlu, Eze Cletus Ilomuanya, on Monday charged the former Governor of Imo State, Rochas Okorocha to be ready for another encounter.

However, a few hours after the incident, an online platform claimed that the monarch denied any altercation with Okorocha.

The media adviser to the monarch, Kennedy Eweama, in a statement, said the monarch never granted an interview to any journalist where he denied that having an encounter with the former governor.

Ilomuanya noted that he has not forgiven the former Governor and he should be ready for another encounter when and wherever they meet.

The crisis started between the duo when Okorocha removed Ilomuanya as the Chairman of the state council of traditional rulers.

The statement said, “Our attention has been drawn to a mischievous and misleading report in the social media, that he (Ilomuanya) condemned the report of the pummeling of former Governor Rochas Okorocha in Air Peace yesterday.”

“The jaundiced report purported that Eze Ilomuanya spoke to a news outfit. For the avoidance of doubt, the said report is false and bears no semblance of truth whatsoever or howsoever. Eze Ilomuanya never spoke to any person. The concocted story does not in any way bear Eze Ilomuanya’s imprimatur.”

“Our investigation has incontrovertibly proved that Okorocha’s goons desperately planted the nonexistent story to water down his further humiliation.”

“We’re, however, not perturbed by such childish, petty and atavistic media antics. Okorocha indisputably adorns pariah apparel. Not even the most expensive white paint in Nigeria can cleanse Okorocha’s iniquities.”

“Okorocha must also realize that the evil that men do now lives with them, and not after as previously thought.”

“His narrow escape from thorough pummeling inside Air Peace was a tip of the iceberg. Over a million other Imo people are waiting for Okorocha out on the streets.”