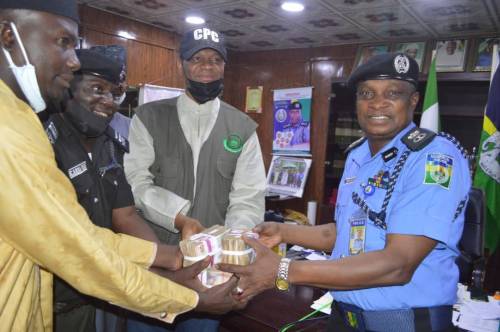 Kano State Police Command and the Consumer Protection Council on Friday rewarded two police officers with N1 million for rejecting the same amount of money offered to them as a bribe.

Information gathered revealed that Garba Rabo and Jamilu Buhari were serving on the task force of the Consumer Protection Council (CPC) in the state when they were bribed.

The spokeman of the command, Abdullahi Jigawa, in a statement released on Friday disclosed that the police officers while carrying out their duty received information that expired goods worth billions of naira were kept in a warehouse in the Kano metropolis.

“The task force team stormed the warehouse, where one million naira was offered to them as a bribe. They rejected the bribe, recovered the expired goods worth billions of naira, the money as an exhibit and arrested the suspect,” Mr Kiyawa said.

The Acting Managing Director of the CPC, Baffa Dan’agundi, commended the police officers for rejecting the bribe.

Dan’agundi said the council had decided to show appreciation for the good conduct of the officers by presenting them with a gift of one million naira.

He urged Nigerians to always join hands with police and appreciate those performing their duties well.

The state Commissioner of Police, Sama’ila Dikko, called on other officers to emulate their example.