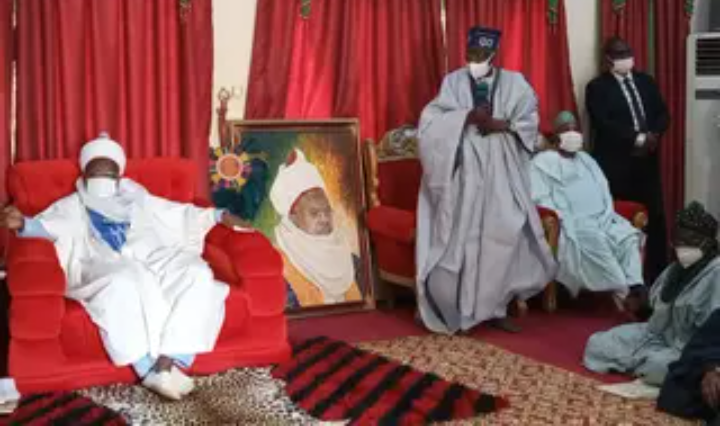 The National Leader of the All Progressives Congress and former Governor of Lagos State, Bola Tinubu, on Wednesday visited the Emir of Katsina, Abdulmumini Kabir Usman.

The APC leader visited the monarch hours after the reports of disagreement between him (Tinubu) and president Muhammadu Buhari, who is from Katsina State.

Tinubu was accompanied by Governor Bello Masari and other top politicians.

From the palace, Tinubu headed to the Katsina Central Market, where over 100 shops got burnt in a fire outbreak on Monday.

Tinubu visited the market to condole with the traders who lost properties worth billions of naira and doled out N50,000 million to victims of the fire incident.

He urged that normal market activities should continue at the market despite the tragedy.

According to Tinubu, the reason for the visit was to commiserate with the traders who lost properties as well as Governor Masari.

The former governor called for unity among Nigerians, saying that Nigerians must be their brother’s keeper.

Meanwhile, Tinubu has said he has a good and productive relationship with President Muhammadu Buhari.

It is rumoured that there is a crack in the relationship between Buhari and Tinubu and that the crack was tactically created to stifle Tinubu’s presidential ambition and pave way for another candidate to clinch the 2023 presidency.