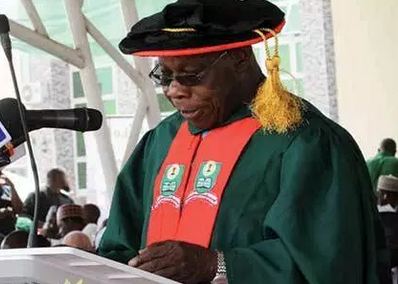 Former President Olusegun Obasanjo on Saturday stated that he would live the rest of his life serving humanity as a statesman.

Obasanjo made this known while speaking in Abeokuta at the 20th anniversary of the Communion Faith Assembly and new chapel dedication.

The former Nigerian leader disclosed that he arrived from Sudan on Friday night and would be travelling back to the United States on Sunday.

“I am committed to global peace and service to humanity and I am here to play my part in peacebuilding”, he said.

The former Nigerian leader noted that the best way to determine a successful life was by measuring one’s positive impact on others’ lives.

Meanwhile, the Governor of Sokoto State, Aminu Tambuwal on Saturday stated that the ruling All Progressives Congress will soon collapse.

The Peoples Democratic Party chieftain stated this during the flag-off of the party’s campaign for the forthcoming local government election in the state.

He further stated that the opposition party withdrew from the electoral process because it has issues at the national and state levels.

The governor added that there is nothing that APC could show as its achievement since coming on board in 2015.

“The party is enmeshed in problems and it will soon collapse,” he said.