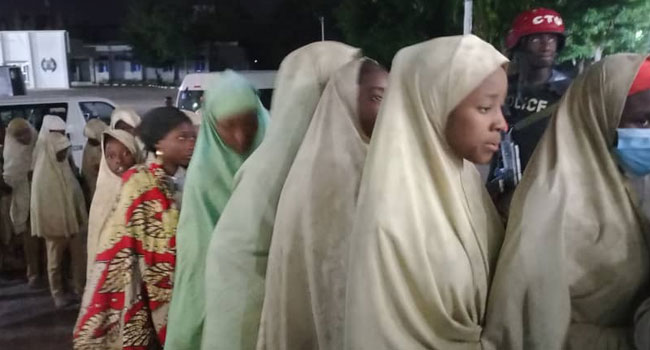 Some freed students of Government Girls Secondary School, Jangebe in Talata-Mafara Local Government Area of Zamfara State have vowed not to return to school.

Naija News had reported how bandits abducted some schoolgirls from the school in February 2021 and released them after few days in captivity.

In an interview with SaharaReporters on Friday, some of the students vowed never to return to school again, while others decided to seek transfer to another school in Gusau to continue their education.

“My friends and I have decided not to return to school again because we don’t want gunmen to abduct us again,” a student said.

Another released student said though she hoped to be a medical doctor or nurse, she was no longer returning to school.

“My future ambition before was to be a medical doctor or nurse but I won’t be going back to school again. The Nigerian government has failed to protect us,” she said.

Meanwhile, the South West region will soon unveil a joint security outfit to further fight the insecurity in the region, the Aare Ona Kakanfo, Chief Gani Adams has declared.

He revealed that the security outfit will consist hunters, Odua Peoples Congress (OPC) and Agbekoya members who will all have the mandate to secure the lives and properties in the region.

Adams added that the matter is already a subject of discussion before the governors of the region.

He made the declaration on Thursday during a private visit to Governor Seyi Makinde of Oyo State where issues related to the security and economy of the South-West were discussed.