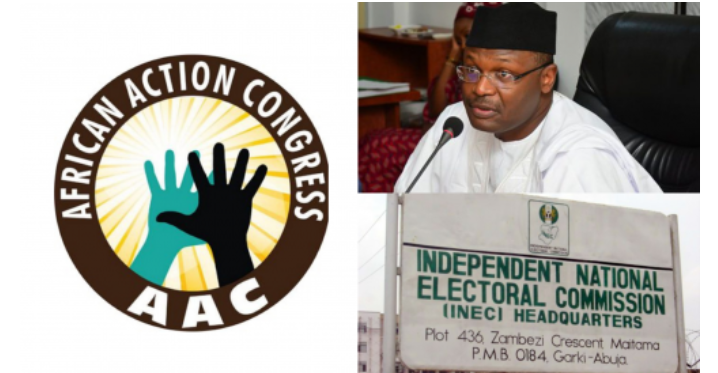 Some members of the African Alliance Congress have been arrested by security operatives upon their arrival at the headquarters of Independent National Electoral Commission, INEC to protest the commission’s alleged interference and imposition of expelled member, Leonard Ezenwa, on the party.

According to SaharaReporters, the security operatives which consist of police, operatives of the Department of State Services and the Nigeria Security and Civil Defence Corps were at INEC headquarter to hinder the protest.

It was gathered that five members of AAC were arrested and taken into the building of the commission.

A further report disclosed that some members of the party in a bus were harassed and sent away by the gun-wielding security operatives.

Recall that some members of the party gave the electoral body two weeks ultimatum to stop interfering in the affairs of the party.

They also called on the Chairman of INEC, Prof. Mahmood Yakubu, to return the party to its rightful owner.

The former Presidential candidate of the party, Omoyele Sowore, who led members of the party to the commission, commended Yakubu for interfering in the affairs of the party.

The human rights activist further stated that the party would mobilise and direct all its members at the expiration of the ultimatum to occupy and shut down all the offices of the commission across the country.

He faulted the partisan role played by the commission by giving illegal recognition to Ezenwa.

Recall that the African Action Congress stated that its Presidential candidate in the 2019 general election, Omoyele Sowore, has long been expelled from the party.

Speaking to newsmen on Wednesday, the National Chairman of AAC, Dr. Leonard Nzenwa, said Sowore’s expulsion was ratified by its highest decision-making organ in 2019.