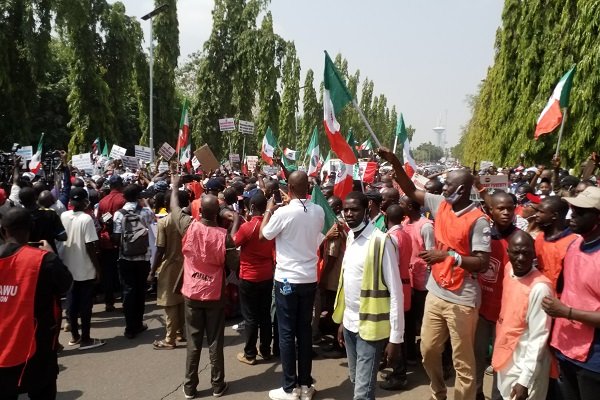 The House of Representatives has said that the National Assembly would not enact any legislation against Nigerian workers.

Majority Leader, Hon. Ado Doguwa made this known while addressing hundreds of workers under the aegis of the Nigerian Labour Congress (NLC), on Wednesday, who stormed the National Assembly.

He advised the organised labour to lobby their representatives at the National Assembly to kill the proposed transfer of the minimum wage from the Exclusive Legislative List to the Concurrent List.

Doguwa applauded the workers for their peaceful protest and hailed them f0r channelling their grievances through the right channel.

“You are in the right hand and in the right place and the right institution which is a representation of the general membership of organized labour in Nigeria.

“From what I am seeing now, it is clear that organized labour is against that Bill. I want to assure you that the House of Reps would give a listening ear to your message.

“We will still invite you to come and engage with the relevant committee of which I am a member. You will come and make your position fully.

“Your position will be heard at the committee level and when we come to plenary to consider the bill, members that are representing your respective communities, engage with them to do justice to that Bill and I can understand that the only justice would be to kill the bill.

“I want to advise please lobby members that you elected that you do not want the bill and make sure the bill is killed,” he said.

Recall that the workers had stormed the National Assembly to protest the proposed transfer of the minimum wage from the Exclusive Legislative List to the Concurrent List.

The lawmaker had cited the inability of state governors to pay the N30,000 minimum wage for the move.

Addressing the workers, NLC President, Ayuba Wabba, said the bill is not accepted by the Nigerian workers and demanded its immediate withdrawal.

He said the failure of the National Assembly leadership to withdraw the bill would attract the anger of Nigerian workers and the organised labour will declare a national strike.

Wabba said: “The NEC decided that there will be a national protest action commencing from March 10, 2021, in the Federal Capital Territory and especially to the National Assembly.

“The NEC decided that should the need arise, it has empowered the National Administrative Council of the NLC to declare and enforce a national strike action, especially if the legislators continue on the ruinous path of moving the national minimum wage from the exclusive legislative list to the concurrent legislative list.”