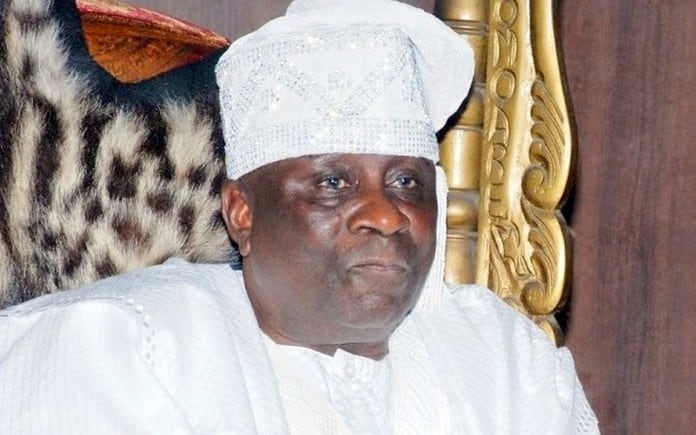 Nigerians have expressed their opinions over the statement made by the Oba of Lagos, Rilwan Akiolu that the hoodlums who stormed his palace last year during the #EndSARS Protest allegedly stole his $2 million and N17 million.

Naija News reports that the Oba of Lagos made this known while speaking at the Glover Hall Memorial Commissioning, Lagos on Wednesday.

Akiolu told the people present at the event that he wanted to say it publicly that hoodlums and #EndSARS protesters stole $2 million and N17 million in his palace.

This newspaper reports that youths had last year stormed major cities across the country to protest the extra-judicial killing of Nigerians by operatives of the now-disbanded Special Anti-Robbery Squad (SARS).

Some of the hoodlums also stormed the palace of the Oba, destroying Oba Akiolu's residence.

However, some Nigerians took to the micro-blogging site, Twitter to condemned the monarch for saying such in public, while others queried the traditional ruler for having such a huge amount stashed up in his palace.

Below are some of the comments captured by this platform:

So the Oba of Lagos Oba, Rilwan Akiolu had this type of money $2million and N17million in his house........please what is his work again as Oba?

The audacity with which these old shameless greedy appalling cretins spew rubbish with a straight face never ceases to amaze me.
And who best for the Oba of Lagos blame it on if not "hoodlums" and make sure it's linked to the #EndSARS protest.
These thieves should fear of God oo. https://t.co/1JMaxBD72S

#EndSARS 20:10:20 remains fresh in our memories. Its ridiculous for the Oba of Lagos to accuse protester of stealing $2million and 17 million naira from the palace.
Has the palace become a money bank ? pic.twitter.com/wmstzNv4TW

Is the the Oba's palace now a federal cash reserve?

Oba of Lagos wey be thief!

Breaking News: Oba of Lagos has officially joined sinzu cabal... Welcoming ceremony will be handled by our one and only ogbeni Bawa. Cheers my people #EndSARS in the mud again pic.twitter.com/vToFIaFe0r

Which work Oba of Lagos do wey e get 2 million dollars cash for house?

The Oba of Lagos should please drop his account details so that we could make our little contribution from our end. He must get back this is $2m and N17 million today #EndSARS

Where did a king get $2m and N17m? How about the money-filled casket? EFCC your attention is needed.

He should be telling EFCC what he was doing with that amount & how he got the $2m after this revelation, but this is Nigeria, even bandits dey ball