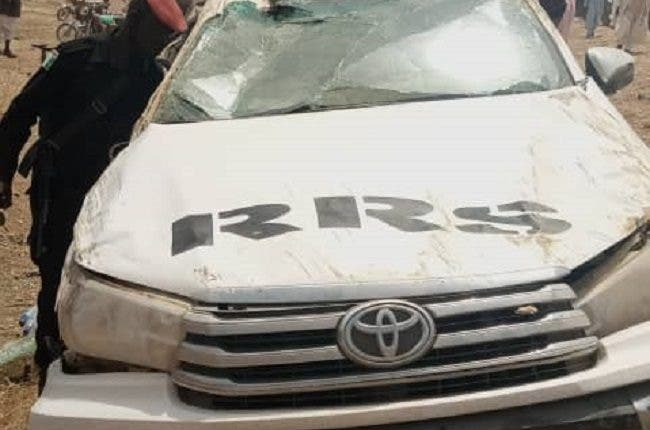 Some vehicles in the convoy of Bauchi State Governor, Bala Mohammed were on Monday involved in an accident.

Naija News understands that a Toyota Hilux van conveying about ten members of the Rapid Response Squad (RRS) who were in the Governor’s convoy lost control while on top speed and somersaulted severally.

It was further learnt that the accident was caused by poor visibility on the road which is currently under construction.

The Governor was said to have been on an inspection tour of some of the on-going projects awarded by his administration.

However, immediately after the accident happened, people at the scene and others in the convoy rushed to save the life of the police officers but one of the officers was already discovered to be unconscious.

The vehicle conveying the governor was already far ahead when the accident happened but other vehicles in the convoy including that conveying journalists, commissioners of information, works and transport stopped and participated in the rescue operation of the victims.

The affected policeman has been rushed to a nearby hospital in Bununu, the headquarters of Tafawa Balewa local government area, for medical attention.

Others who were badly injured as a result of the accident were also hospitalized and are said to have been transferred to Bauchi for better treatment.

No life was confirmed lost as at the time of filing this report.

Meanwhile, the Director-General of the All Progressives Governors Forum, Dr. Salihu Lukman has told President Muhammadu Buhari to urgently find a solution to the rising spate of insecurity and poverty in the country.

Lukman in his submission said poverty is feeding insecurity in the country and the government must find practical ways to deal with the issues.

The Director-General of the Progressives Governors Forum in a paper titled ‘Poverty and Existential Problems of Nigeria’, which he presented in Abuja, on Monday said what the country needs is beyond blame games and partisan politics but workable solutions to lift Nigeria out of the current mess.

He, therefore, charged the leadership of the APC to also rise above partisanship comments and activities by providing leadership that will move Nigerians out of poverty.