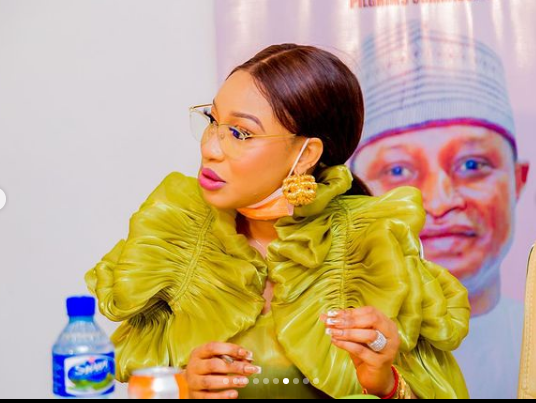 The earlier claim by popular Nigerian actress, Tonto Charity Dikeh better known as Tonto Dikeh been appointed as an ambassador for the Nigerian Christian Pilgrim Commission (NCPC) has been declared untrue.

Naija News reports that the actress on Friday, February 26 took to her social media page, Instagram precisely to announced the development.

However, a statement coming from the NCPC moments later has described as untrue the claim by the Humanitarian. In the communique in which copy was made available to newsmen, the Executive Secretary of the NCPC, Rev. Yakubu Pam acknowledged receiving the actress at his office on Thursday, February 25.

Pam, however, said the claim by the 35-year-old Nollywood actress which has gone viral on the media is a total misrepresentation of what transpired between her and the commission. The Christian leader revealed that the actress who is the founder of Tonto Dikeh Foundation had expressed her willingness and interest to partner with the Commission in the area of peacebuilding.

The clergy urged Nigerians to disregard Dikeh’s claim which he described as spurious and unfounded. He said the commission though appreciates her desire to partner with them on peacebuilding initiatives and in the area of pilgrimage sponsorship to the Holy Land.

The statement reads: “I wish to state in categorical terms that King TONTO W. C. DIKEH paid an official courtesy visit to me as the Executive Secretary of the Nigeria Christian Pilgrim Commission on 25th February 2021 at the corporate headquarters of the Commission in Abuja.

“As the founder of Tonto Dikeh Foundation, she expressed her willingness and interest in partnering with the Commission in the area of peacebuilding.

“She equally cashed in on the visit to commend me the NCPC boss for my positive and relentless peace initiatives across the country.

“However, I am suddenly inundated with claims from King Tonto Dikeh herself that she has been officially appointed as Ambassador of peace by this great Commission. This claim has gone virile in the media.

“The Commission frowns at this claim which is a clear misrepresentation of what transpired.
The fact remains that the I the Executive Secretary of NCPC never appointed King Tonto Dikeh as an Ambassador of Peace for NCPC and this was not part of her visit therefore this claim by her is spurious, unfounded and should be discarded and seen by all Nigerians as a figment of her imagination.

“Nevertheless, we appreciate her desire to partner with us in our peacebuilding initiatives and in the area of pilgrimage sponsorship to the Holy Land.”

Meanwhile, former Big Brother Naija housemate, Erica Nlewedim has given a savage response to a fan who recently accused her of exposing her body.

The fan had taken to social media to troll Erica, accusing her of exposing her body unnecessarily despite being a beautiful woman, Naija News reports.