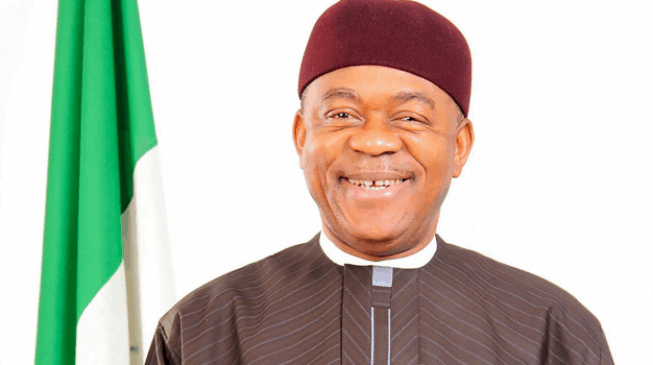 The lawmaker representing the Abia Central Senatorial district, Theodore Orji, has condemned Senator Smart Adeyemi, representing Kogi West for attacking the personality of the Governor of Abia State, Okezie Ikpeazu on the floor of the Senate.

Adeyemi while contributing to a motion on the Safe School Initiative in Nigeria, said Abia State is being governed by drunkards.

He further stated that while some governors are committed to the welfare and protection of their people, Abia was ravaging in poverty.

Former Governor of Abia State, Theodore Orji, while reacting to the outburst in a statement released through his Chief Liaison Officer, Ifeanyi Umere, on Thursday, called on the Kogi lawmaker to apologize to Governor Okezie Ikpeazu and the people of the State.

The federal lawmaker regretted that a man like Smart Adeyemi could go out of “esteem indecorous of a Senator and vocalize such uncouthness on the governor of Abia State without let or hindrance.”

Senator Orji noted that the Abia State Governor has distinguished himself as a true leader with people’s oriented projects executed and commissioned in many parts of the State by his administration.

He added that the Peoples Democratic Party Governor has made his state investment heaven for foreign and local manufacturers.

The ex-Abia Governor, therefore, demanded that Senator Smart Adeyemi should retract his derogatory remarks on the floor of the Senate, and in major national newspapers.

The statement partly read, “that he tenders well-worded apology to the Governor and people of Abia without delay.”

“That Smart Adeyemi extends his compunction to All Abians who elected Governor Okezie Victor Ikpeazu back to back on two consecutive tenures as Governor of Abia State. An office Smart Adeyemi has never occupied or sought to occupy as to know or feel the enormity of dignity and profundity of carriage which the office of the Governor conveys in his uncouthness.”

“Abia citizens have been scorned in the face, hence Senator Smart Adeyemi must crawl on his knees in utmost penitence, confession and court the forgiveness of all Abians for daring to insult Governor Okezie Ikpeazu, a man with whom we are well pleased”.