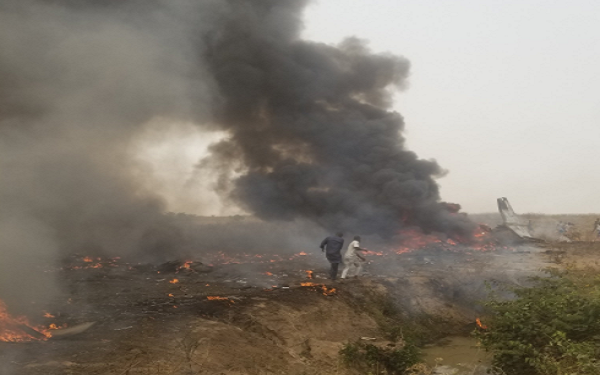 Seven bodies have been recovered from the crash site of the military plane crash which occurred on Sunday in Abuja, the nation’s capital.

The recoveries were confirmed by the Federal Capital Territory Emergency Management Agency.

It will be recalled as previously reported by Naija News that a Beechcraft KingAir B350i aircraft belonging to the Nigerian Air Force crashed near the Nnamdi Azikiwe International Airport in Abuja, killing all seven personnel on board.

Giving details of happenings after the accident, the FERMA Director-General, Alhaji Abass Idriss, said the recovered bodies have been deposited at the Nigeria Air Force morgue.

Idriss who spoke to Punch, also denied reports that some persons were killed on the ground by the aircraft when it crashed.

He said, “We recovered seven bodies from the crash site and the remains have been taken to the NAF morgue. The NAF has the manifest and they know all those on board. The plane did not crash into any building or individuals on the ground, so all the people on board have been accounted for.”

Meanwhile, the Nigerian Air Force (NAF) has confirmed the death of all 7 personnel on board the military aircraft that crashed on Sunday afternoon.

According to a statement by the NAF spokesperson, Air Vice Marshal Ibikunle Daramola, the crash was caused by a reported engine failure.

The statement added that the Chief of Air Staff, Air Vice Marshal I.O Amao commiserates with the families of those who lost loved ones in the crash while urging the entire public to remain calm as an investigation into the matter has been opened.

The statement reads: “This is to confirm that a Nigerian Air Force (NAF) Beechcraft KingAir B350i aircraft crashed while returning to the Abuja Airport after reporting engine failure enroute Minna. First responders are at the scene. Sadly, all 7 personnel on board died in the crash

The Chief of the Air Staff (CAS), @CAS_IOAmao, has ordered an immediate investigation into the incident. While urging the general public to remain calm & await the outcome of investigation, the CAS, on behalf of all NAF personnel, commiserates with the families of the deceased.”