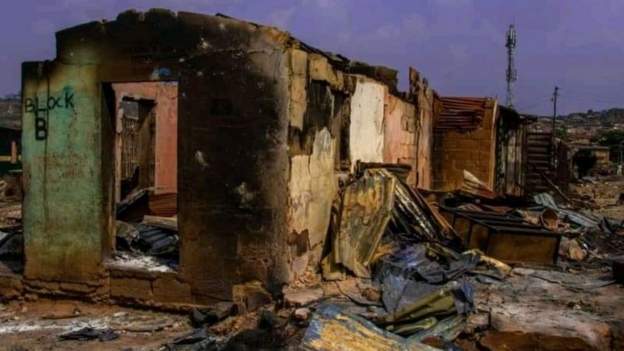 A Hausa leader in southwestern Nigeria’s Oyo State has confirmed that 10 people have been killed in attacks by Hausas on a group of misguided Yoruba.

The incident took place after an Fulani man died in a Shasha market as a result of an altercation between a Baha’i stray farmer and a Fulani shopkeeper in the market on Thursday.

Eyewitnesses said the Bahaushen, who was pushing a basket of tomatoes, fell in front of the woman’s shop which caused the tomatoes to spill. That is why the woman said he had to pick all the tomatoes, which led to a riot that left one Bayerabe dead.

“It was from there that we were attacked by some Yoruba vigilantes as a result of the clashes in the Shasha market,” said a man seeking refuge after the clashes.

He added that “the incident resulted in the death of one of the woman’s relatives – that is why the Yoruba people splashed out and sent messages attacking the Hausas”.

However, the chairman of the Hausa Shasha market, Alhaji Usman Idris Yako, told the BBC that he had so far confirmed the deaths of 10 Hausas.

“In the meantime, the bodies of seven Hausas have been brought to the police station, and two people are in an undisclosed house. I have also been informed that the body of a Hausa man has been found abandoned. on the street, “he said.

“More than 100 of our Hausa brothers have been hospitalized in various hospitals while hundreds are seeking refuge in relatives’ homes, some have fled to Lagos and some have returned to the North. The situation is dire.”

But Rabi’u, one of the asylum seekers at the home of Sarkin Hausa Shasha, Mallam Haruna Mai Yasin, told BBC Hausa that nearly 20 Hausas had been killed in the clashes.

He added that after the Shasha market incident on Thursday evening, members of the Yoruba community learned that the Baha’is had killed their brother and that they “used to enter houses where Hausas used to live and attack them”.

“People armed with assault rifles came from areas such as Bodija, Mokola all over Akinyele Local Government Area, and set fire to more than 250 shops in Shasha market, some of them belonging to fellow Yoruba. They also blocked the road. they are killing Hausas,” he said.

Rabiu said his two friends, originally from Kano and Sokoto states, were among those killed, prompting him and other people to flee to the residence of Sarkin Shasha to seek refuge.

He added: “By God, we are near the King’s palace. We are close to 400. We are afraid we will be killed, so we fled here because since the incident the security agencies have not taken appropriate action.”

The state police said only one person was killed in the crash.

“Anyone who tells you that more than one person has died is lying,” army spokesman Olugbenga Fadeyi told BBC Hausa.