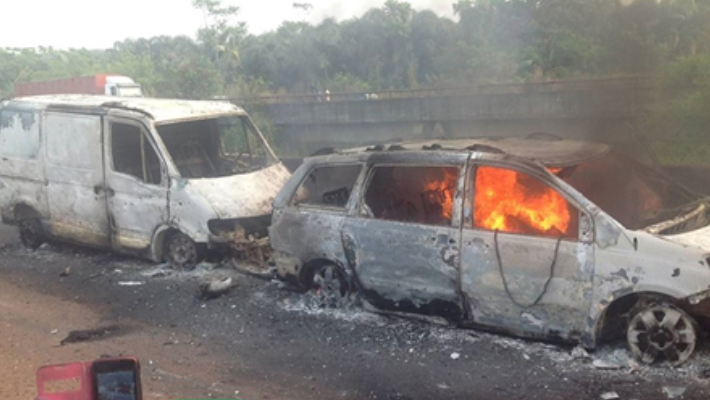 File Image: An existing photo of a road crash somewhere in Nigeria

No fewer than four persons have been reported dead in a road crash on Ijebu Ode -Benin expressway.

Naija News understands that the horrible incident which happened in Atoyo, inbound Ogbere involves a 14-passenger commercial bus and a fuel tanker.

Akinbiyi related the accident to recklessness from the bus driver, adding that the incident happened as a result of brake failure. Naija News understands that TRACE, Federal Road Safety Corps and the police responded to the incident and controlled traffic on the route to allow motorists to get to their destinations while dealing with the situation.

Giving more details about the crash, Akinbiyi said: "A tanker loaded with black oil inbound Benin through the Ijebu Ode-Benin expressway, spilt its content on the road due to leakage from the tanker and had to stop when the attention of the driver was called by other drivers driving in the same direction.

He alleged further that the driver of the commercial bus disobeyed the warning at the diversion point and drove on the black oil. He said; "The driver experienced a brake failure, lost control and ran into the bush hitting a tree in the process before the vehicle was engulfed in fire, burning four passengers to death out of the 14 onboard the bus.

"The whereabouts of the remaining 10 can not be ascertained as at the time of filing this report," he said.

Naija News learnt that the victims were burnt beyond recognition. The TRACE spokesman charge motorists plying the road to cooperate and show understanding with traffic managers to make the road safe for all users.

In another news, Naija News reports that an unnamed man has been stabbed to death by a prostitute in Imo over non-payment of an agreed amount.