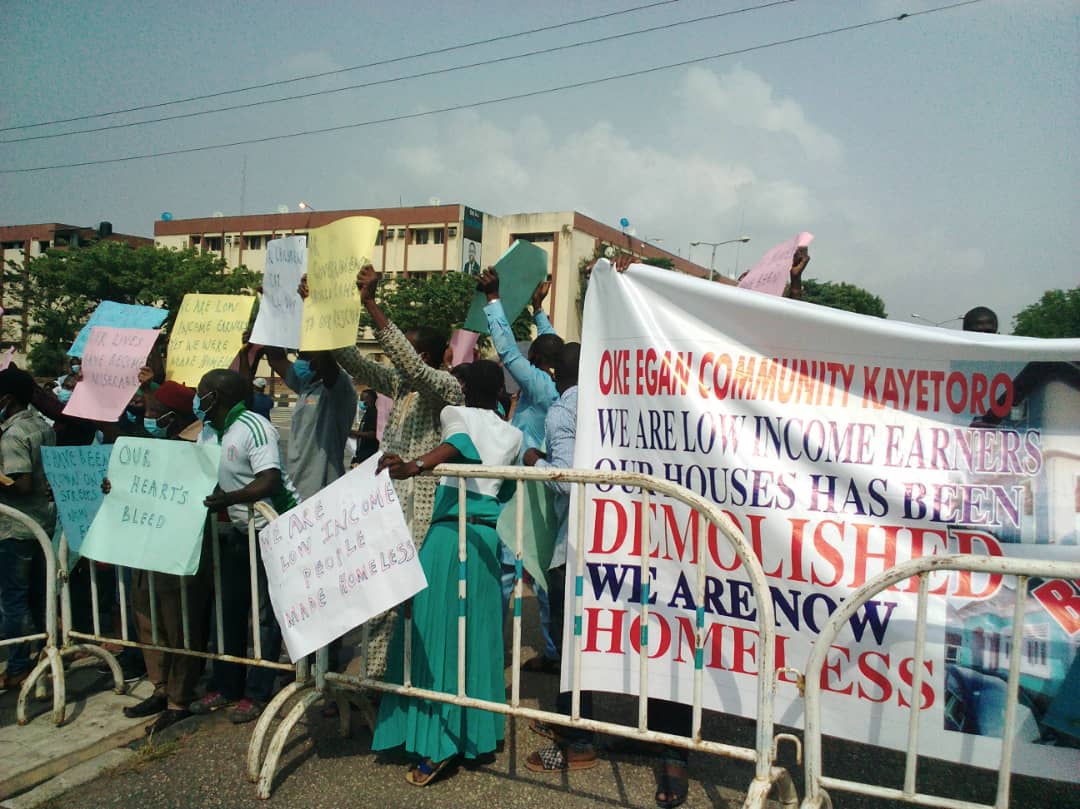 House owners at Oke-Egan community, Kayetoro, Eleko, Ibeju-Lekki area of Lagos on Friday, February 12 reportedly trooped out en masse to protest demolition of over 400 houses in the communities.

Naija News learnt that the landlords stormed the state House of Assembly to expressed dissatisfaction with the demolition which they considered unlawful.

Expressing their grievances, the protesters displayed on placards with the inscriptions, 'We have been demoralised, nowhere to go,' 'We want back our properties,' 'Our government has made its citizens helpless,' 'We want our land back,' 'We are low-income people made homeless,' 'Our children are crying,' among others.

According to them, they were resting in their apartments at about 3 am on Monday when some government officials led by task force operatives brought down the buildings with bulldozers.

The landlords, led by one Mr Etim Odiase, said they purchased the land from the community's native families. Naija News understands that the residents had through their lawyer reported at the Office of the Surveyor-General of the state last Friday when they learnt of the demolition plan, noting that they were shocked their houses were demolished without being served any notice.

"Our lawyer was told that there was nothing like that. But around 3 am on Monday, some officials in the company with task force policemen brought bulldozers and demolished about 400 houses. We were never told that the land had been acquired by the state government. Some of us from the community were told that the land was not under government acquisition.," Etim explained.

Also lamenting on the development, another landlord who gave his name as Damilare James, said he made enquiries from the office of the Surveyor-General about the land and he was told it had not been committed to any public use and could be regularised.

He alleged that they contributed N6m and gave the officials sent to them, adding that they were assured there was no problem.

He added: "They rendered us homeless and destroyed our property worth billions of naira. We want Governor Babajide Sanwo-Olu to restore our land to us. We want the governor to give us Certificates of Occupancy over the land as compensation for demolishing our houses, for putting us in emotional trauma and for putting our mothers in the problem.

A clergy identified as Pastor Abiodun Ajayi, whose house was also demolished, said they couldn't escape the house with anything. He alleged that the government officials came with thugs to carry out the demolition.

He said, "My house was the first to be demolished and we couldn't take anything away from it. They came with thugs and we could not talk. We have been coming here (Assembly). We wrote letters and the Oba Akiolu of Lagos also wrote a letter on our behalf.

"They didn't need the land for any industry; they said it is meant for a housing scheme. It is painful that we are citizens, and voted for them yet we were treated like this. Over 400 houses were demolished.

"They should listen to us. With the #EndSARS protest and COVID-19, people lost their jobs. Now, a lot of people have been displaced."

Responding to their lamentations, the Speaker of the House, Mudashiru Obasa, represented by a member representing Ajeromi/Ifelodun Constituency I, Lukman Olumo, appealed for calm, adding that the House would address their grievances.

He said, "The House of Assembly is your House and you voted us to protect your interest and you can rest assured that your interest will be protected. Nobody in Lagos can treat the people of the state unlawfully on their property.

"You can have the best of assurances that this matter will be looked into critically by the House. I can assure you that very soon, you will get a favourable response. Let us be law-abiding; we should not take the law into our own hands."

Meanwhile, one of the youth representatives on the Lagos State judicial panel on police brutality and human rights abuse, Rinu Oduala, has announced her withdrawal from the panel, Naija News reports.