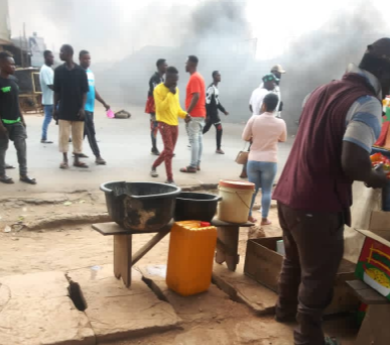 In a viral video, the suspected fraudsters went on a rampage by making bonfires on the major road and blocked the Osogbo/Ilesa road.

They also stormed the Ilesa West Local Government Secretariat, Ilesa, and made bonfires on the road, therefore halting the free flow of traffic along the busy road.

The protest action rendered motorists using the road to be stranded as no vehicle was allowed to pass. They alleged that the EFCC operatives in recent times arrested some of their colleagues in a hotel.

Meanwhile, some Nigerian communities have been accused of collaborating with members of the dreaded Boko Haram terrorist group to attack the Nigerian military.

It was gathered that the sect gets unwavering assistance with the communities acting as informants and leak soldiers’ movements to terrorists.

According to military intelligence, they also harbour them in their houses, settlements and also help to plant improvised explosive devices (IEDs).

It was learned that at least thirteen Local Governments Areas are frustrating military operations in parts of Adamawa, Borno and Yobe States.

PRNigeria reports that Boko Haram members have created camps in a number of villages while making money from fishing, farming and other economic activities.