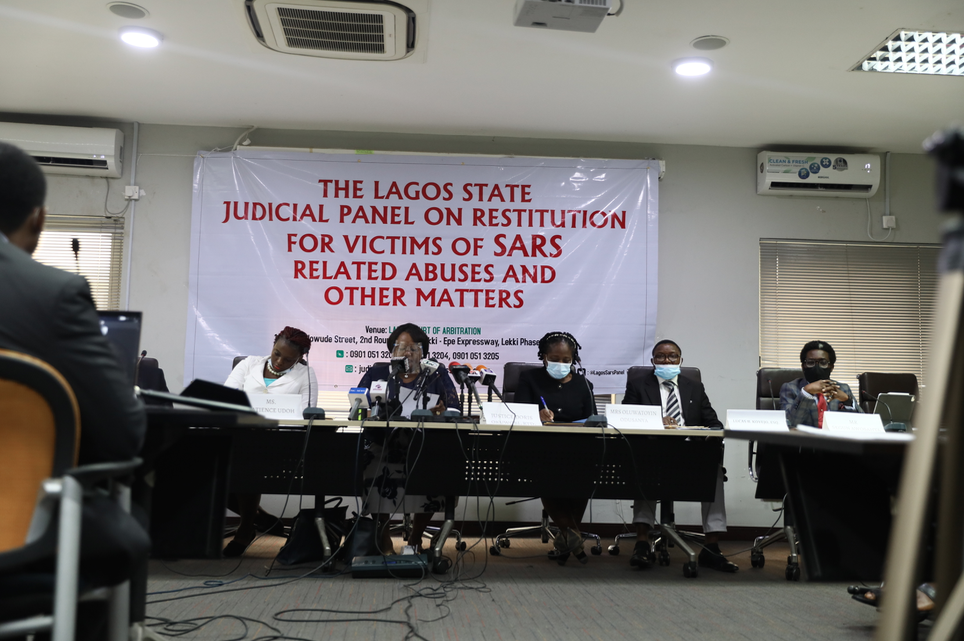 Youth representatives on the Lagos judicial panel of inquiry investigating the alleged extrajudicial activities of the now-disbanded Special Anti-Robbery Squad (SARS) have disagreed with the reopening of the tollgate.

Naija News reports that at its sitting on Saturday, the panel approved the reopening of the Lekki tollgate and returned of tollgate to the control of Lekki Concession Company (LCC).

But in a statement released shortly after the panel ruling, the two youth representatives on the panel faulted the decision of the panel to return the tollgate to LCC.

According to Rinu Oduala and Temitope Majekodunmi, their views were not reflected in the panel verdict, adding that the reopening of the tollgate would hinder the successful completion of the ongoing investigation on the incident.

They demanded that the Lekki toll gate should remain shut and under the purview of the panel until full investigations and hearings are concluded.

“The Youth Reps at the Lagos judicial panel of inquiry and restitution for victims of SARS related abuses & Lekki Toll Gate Incident will like to formally express our dissent to the Order allowing for the repossession of Lekki Toll Gate,” the statement reads.

“We’d like to remind the public this panel was set up on our 5 For 5 demands during the nationwide protests against police brutality. So any decision without considering the opinions of the Youth Reps reflected in the rulings will be in violation of Rules setting up this Panel

“We have made efforts to communicate our position on the application by LCC to take repossession of the Lekki Toll Gate to the Chairlady as required by the Rules of the Panel but our dissent wasn’t reflected in the ruling.”

The youth representatives said their position is in line with panel’s obligation of ensuring impartiality “throughout hearings for victims and contribute to fair, effective, efficient conduct of its hearings and more importantly, for voices of victims not be silenced in the course of this assignment

“We understand from the Forensic Report submitted by the expert employed by the panel, LCC management has, despite requests, failed to provide information, which include access to servers; who ordered the extraction of CCTV footage; date & time of extraction of the footage from the CCTV; method used for the extraction as well as such other information which may be useful for purposes of the forensic examination & report,.

“None of these have been provided by LCC and so it is impossible to conclude that investigations are over. It is therefore imperative that the Lekki Toll Gate management should not allowed to repossess the toll gate until full investigations are concluded.

“This is especially important as victims of the Lekki Toll Incident are yet to be heard and the public is still in the dark on the full details of the Incidence.

“Based on these fact, we are of the considered view that the Lekki Toll Gate remain shut and under the purview of the Panel until full investigations and hearings are concluded by this Panel.

“We do not have any intention to obstruct the rulings of the panel. We only want our dissent to be on record. We are committed to ensuring justice for victims.“