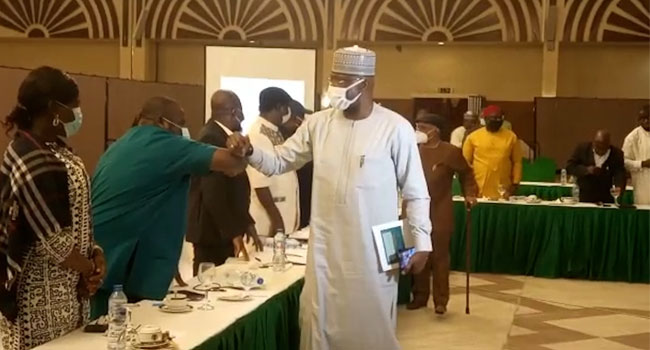 The details of the meeting between the Federal Government and the organised Labour over the issues of increase in the pump price of petrol and electricity tariff hike have emerged.

The federal government delegation was led by the Secretary to the Government of the Federation (SGF), Boss Mustapha, and the Minister of Labour and Productivity, Chris Nigige.

While the President of the Nigerian Labour Congress, Comrade Ayuba Waba, led the organised labour delegation to the meeting.

At the opening of the meeting on Monday, Ngige said the government’s side of the bargain has received reports from the committee set up to look into some of the demands of the labour movements.

Similarly, Mustapha also noted that the committees set up last year will be presenting their findings during the meeting.

The SGF also assured the labour leaders that the government is ready to implement the overall agreement that will be reached at the end of the day so that industrial actions will be minimized.

On his part, NLC President Waba said the unions are committed to making the negotiations yield the needed results.

In the same vein, the Trade Union Congress (TUC) president, Quadri Olaleye, said he hopes the meeting will resolve all issues pending.