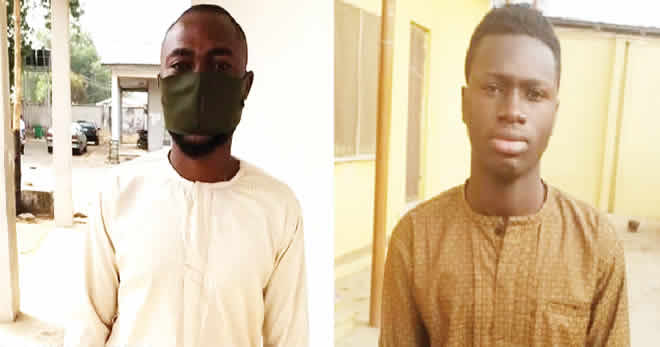 A serving member of the  National Youth Service Corps, Sam Abiola, has been arraigned before the Kwara State High Court in Ilorin for defrauding an unsuspecting male in pretence to be a woman.

Naija News understands that the suspect was arraigned by the Economic and Financial Crimes Commission on Monday, February 1, 2021, over a romance scam.

Abiola was said to have defrauded one Rick sometimes in September 2019 after pretending to have fallen in love with him, disguising as a female with the name Missie Bonie.

Charges against the corp member currently serving in Kogi State reads: “That you, Sam Abiola (Missie Bonie), sometime between July 2019 and September 2019, in Ilorin, within the jurisdiction of this honourable court, did cheat by impersonation when you pretended to be one Missie Bonie, a white female with Gmail account, [email protected], and fraudulently deceived one Rick to send $550 to you through gift card after you made him believe you were in love with him, thereby committing an offence contrary to Section 321 of the Penal Code and punishable under Section 324 of the same Penal Code.”

On another case of a romance scam, the Nigeria anti-graft agency also arraigned one Adebiyi Sodiq. The suspect according to a report by the EFCC Head of Media and Publicity, Mr Wilson Uwujaren, sometime in August 2020, in Ilorin, Kwara State capital defrauded one Many by impersonation.

Sodiq was said to have used his email address; [email protected] to converse with Manny, convincing him that he is a white female with the name Maria and induced him to send his Cash App. The offence which is contrary to Section 324 of the Penal Code and punishable under the same section of the law.

The three-count of charges against Sodiq reads: “That you, Adebiyi Sodiq (alias: Maria Monica), sometime in August 2020, in Ilorin, within the jurisdiction of this honourable court, did cheat by impersonation via your email address; [email protected], to one Manny, by portraying yourself as a white female, named Maria, and induced him to send you his Cash App, a representation you knew to be false, thereby committing an offence contrary to Section 324 of the Penal Code and punishable under the same section of the law.”

However, despite pleading guilty of the charges against him, the prosecuting counsel, O. B. Akinsola, invited to the witness box an operative of the EFCC, Ali Mohammed, to review the facts of the case against Abiola.

Mohammed narrated how the defendant was arrested based on an anonymous petition received by the commission on the activities of fraudsters in the Offa area of Kwara State.

“Documents showing fraudulent messages printed out of the email of the defendant were tendered and admitted in evidence,” the statement read.

On the part of Sodiq, the prosecution counsel for the EFCC, Sesan Ola, called on Eze Uchenna, an operative of the agency, to review the facts of the case against the suspect.

The EFCC operative also gave a narration of the defendant’s involvement in the alleged offence and tendered documents which were admitted in evidence.

However, Justice Akinpelu, while discharging the witnesses, fixed February 11, 2021, for judgement.

In another news, A judge of Delta State High Court, Anthony Okorodas, has allegedly discovered that three children he had with his ex-wife were not his biological offspring.

Naija News reports that the High Court judge was sworn in by Governor Ifeanyi Okowa in 2018.